Attack Method: Will push away the opponent using their tendrils

[Sharp dresser] Neutral trait
This character has an affinity for fashion, and will often have a large wardrobe. They have a tendency to change their clothes often and put together outfits they find appropriate for their situation.
[Attractive] Positive trait
Most people find this character to be very attractive. They can charm others with their looks alone, and will often recieve special attention as a result.
[Gold-Digger] Negative trait
This character will only seek out relationships with those who have something they want, it could be money, power, anything really. This character will also convince their partner to spend money in excess or give them the things they want. They will commonly lose interest in their relationship the moment the other refuses to give or no longer has the thing they wish for.

Eulara will honor anything their social circle honors in the moment, otherwise, they prefer gods related with death or their own craft

The eularae are heterotrophic Plantae-homunculi of the Rosaceae kind, comprised by elongated conjunctions of root-appendages and tendrils, a bulbous body, and a long stem, surrounded by thorns, protruding into a blooming flower.

Before blooming, an eulara is seeded in the form of complex bulbous amalgams that ultimately merge into a singular specimen at the late stages of development. During its developmental stages, the eulara will utilize its fibrous roots as a means of obtaining sustenance through extracellular digestion by processing the anima-matter within its bloom-bed.

These nutrients are thus utilized by the still bulbous-inert bloom and its developing stem, which is thornless and smooth until adulthood is reached. Additionally, exceeding nutrients are processed into scaled-leaves and Tunica, integrally covering the Core-Bulb.

When matured, usually occurring within two to three days after its seeding, the eulara will utilize its roots to excavate its bloom-bed, and bloom into the surface, where it will spend time looking for nourishment, Floral-Ego and Floral-Mori artifacts to incorporate in its first Tunica. By then, the Cephalon-Bloom and Trachea-Stem has already grown out of the Core-Bulb.

The leaves of the Cephalon-Bloom are pinnately compound, asymmetrical, and generally attached surface-to-surface to the petiole. Extrafloral nectaries are present in their margins and petioles. Notably, the leaves are broad, and display a wide range of unnaturally-occurring colours and complex patterns, being arranged as a rosette as they are integrated into the Tunica.

These leaves are rich in epicuticular wax and chlorophyll; they are autotrophic, creating their own food by photosynthesis, through the capture of sunlight, water and carbon, and its processing into sugars, which is then stored in the form of reserves of an energetic mineral that can be synthesised to produce Fragrance or metabolized for chemical energy, transporting it through its phloems (conductive cells) to maintain and manage the continuous growth of the eulara but do not contribute to the sating necessity of consuming Anima.

The leaves and petals of a eulara represent the heavy investment on the individual bearing them; their retention, disposition, arrangement, and management are elaborate strategies for dealing with natural, social, fashion, and many other types of pressures.

As such, the flowers of eularae are particularly "exuberant". Possessing radial symmetry, hermaphrodite qualities, and many spirally arranged stamens; the quantity of sepals and petals is highly variable. These bases are fused in a hypanthium, arranged into a solitary flower. The petals and substances from an eulara themself, or those shared between or recuperated from other eularae, are utilized to manufacture fashionable and efficient improvements to one's Tunica.

Through the correct conditions, these flowers may develop into nutrient and flavour-rich fruits in the likes of drupes. The fruit is nurtured until it is ready ripe, and thus, the eulara will proceed to force-feed a specimen before producing a bloom-bed with it for the development of a new individual.

Their fibrous roots are vascular appendages; extremely dexterous, capable of operating fragile objects, and performing complex tasks that require extraneous levels of minutia, further exhibiting the intelligence and capabilities of the species.

Eularae communicate amongst themselves through a gland located within their bloom; that same organ is capable of emitting kittenish, languid noises corresponding to a particular variation of the Francorum-language.

True to their heterotrophic nature, the eularae do not establish relations without regard for their own benefit, either parasitic or mutual, in a characteristically utilitarian behaviour. Regardless of that, they are not animalistic-predatory beings that systemically prey on those they consider useless. Due to their finely-tuned tastes for quality, they would never consume underwhelming products even if that meant their lives were at risk.

That trait conjunct with their nigh-eldritch elegance comprehends an idiosyncratic personality-base shared amongst all eularae. They are capable of rapidly adapting to what is considered chic in any society or group of peers they become a part of in order to further their objectives. As such, their intellect is quite keen, especially when it comes to learning the method and system of such things as culture, politics, economics, and social matters.

Their sense of aesthetics is often considered morbid, especially landscape-wise; being one of the major reasons why the eularae seek to inhabit worlds with high availability of eligible anima-matter, either war-torn planets or anywhere the opportunity for nourishment and construction of their Tunica.

Although being sociable creatures, eularae do not tend to maintain relationships amongst their species without a clear shared objective such as procreation or the sharing of Tunica-matter. Eularae that develop deep relationships amongst each other will, when near expiration, seek for their significant other in order to become the bloom-bed for their final offspring.

Regardless of their posh and pompous nature, they are, above everything, utilitarians. Thus, their species are not beneath employing their skills as professionals in one area or another, especially if it involves dealing with anima-matter; it is not uncommon for eularae to build careers as battlefield cleaners or in morgues, but the fine dexterity and strength of their appendages paired with their sophistication opens a wide range of careers such as jewelers, decorators, modists and tailors, and especially as expert-sommeliers.

Eularae hail from a relatively unexplored forest-planet within the habitable boundaries of a certain faraway-galaxy. Whilst technically habitable, the lush flora and pseudo-fauna comprising their chlorophyll-rich world did not exactly provide the means for the social or technological advancement of its species.

In those conditions, the few eularae that existed thrived as lonely predatory creatures that gathered only on seasonal occasions to engage in their prototypical exhibition and trading of Tunica-components that were gathered during their relatively uneventful lives.

Certainly not on the top of the food-chain-pyramid of their world, the eularae relied on their high-adaptability and manner of know-how on how to exploit and use the best of the resources available, especially with the aid of their reliable appendages; most-especially when in search of anima-matter.

Their development as a species with a sociological and philosophical nature began when they found a group of spacefaring travellers that had crash-landed on the planet. At first contact, the eularae found no interest in the meek anima-matter that they'd have provided, but were very much amazed at every manner of design exhibited by the newly-landed creatures.

The travellers were the remains of a defunct society obsessed with splendour, luxury, and beauty, often-times to an excessive extent; a stark contrast between preternatural intricacies and the lush forest the eularae were accustomed to. Thus, it felt as if long-lost brethren had finally met.

Shared practicality and utility met like kindred spirits. Whilst the eularae taught the travelers how to explore and utilize the resources available on the planet, and operated both heavy and delicate-duty manufactures of the most-varied kind in order to recuperate the monumental spaceship that went kaput, the travelers rewarded their new-found companions with aeons of structured knowledge of the universe.

Once the time for the travellers to depart the planet came, several eularae gladly accompanied them, spreading throughout the galaxy.

• According to certain anthropolobiologists, eularae bloom knowing everything that their bearer(s) did during the moment of conception. Eularae neither affirm nor decline this claim. 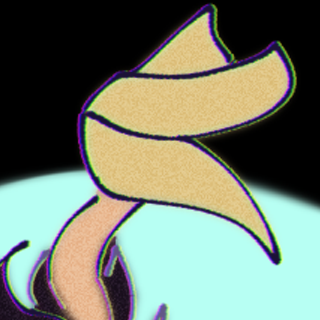 -Back to Species Menu-
< Ethraol
Fairy >