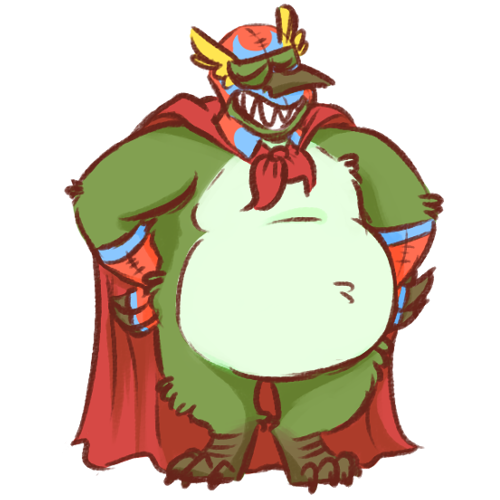 “...And the number one rule, NEVER let your opponent unmask you!” — Aluchaquin rules of the ring, often read before the start of a match

Attack Method: Most Aluchaquins will design their own attack styles, which will always be some form of physical combat. They'll use their own brute strength to win fights, and gather weapons from whatever they can reach in the heat of battle.

[Competitive] Neutral trait
This character tends to be up for healthy challenges. If this character sees a co-worker or someone they see as a rival working harder than they are they may work even harder to compete with this person even if this person has no idea what they are doing or even if they exist.
[Fisticuffs] Positive trait
This character receives a strength boost when fighting with their fists
[Overconfident] Negative trait
This character is too confident in their abilities and is not realistic about how dangerous or challenging something may be. They may take on tasks they cannot do, or put themselves or their team in dangerous situations because they think they can handle it.

Aluchaquins worship many different gods, however will gravitate towards those that promote honor and competition.

Aluchaquins are large, bipedal flightless birds. Their bodies are covered in dense, tight feathers meant to keep their bodies insulated in the cold, and streamlined while swimming. Their feathers are shades of green with a white belly; older aluchaquins will often decorate their feathers with dyes and patterns similar to tattoos. The underneath of their arms are featherless, their skin is leathery and thick, and their hands have extremely large claws that taper into a pointed end when resting.

Aluchaquin heads are completely featherless except for their eyebrows, which are lined with yellow feathers, and a small patch of facial feathers that grows on their chin. Aluchaquin mouths and beaks are separate, the beak appearing as a nose, and the mouth containing shark-like teeth. Because of their featherless faces, aluchaquins are almost never seen without wearing a mask that are unique to the wearer. Male aluchaquins are often smaller than females, and have longer brow feathers and longer noses, however there are many males who have female leaning traits and females that have male leaning traits.

Aluchaquin as a species have built their entire culture around the sport of competitive fighting, as it is not only their main form of entertainment but is thought of as a way of living. In aluchaquin society, all disagreements can be solved by taking it to the ring. Disagreements can range from petty arguments to heavy political debate. The winner of the fight is also the winner of the argument, a system that has surprisingly worked very well for this species for thousands upon thousands of years. Every political leader has been an undefeated champion wrestler, until the next undefeated champion comes along to take their place. These sort of debates are often broadcasted all across Zico when they take place. It's a common misconception that the aluchaquins are a violent lot because of this system, however violence outside of competition is fairly rare. A set of rules and traditions are strictly followed when a competition takes place between any two parties, and those who don't follow these rules are looked down upon, or ostracized for being dishonorable.

All aluchaquins wear a mask in some shape or form, one that will cover their entire head. Masks are deeply intertwined into their own identities, and thus every aluchaquin mask is unique. The construction of a mask is often started once a child aluchaquin is two years old, and will be given a blank mask to make their own over time. When two individuals meet with similar masks, the two will fight for to keep their identity, with the winner receiving both masks as trophy and the loser left to rebuild their identity from scratch. Being maskless is to be naked and shameful, and to pull someone's mask off is a gesture of sheer disrespect. In many aluchaquin families, it is tradition that the eldest will pass down their mask, in exchange for a 'retirement' mask, to their children or grandchildren. The identity of a aluchaquin may be kept alive for generations to come by passing down the mask, and many well renowned champions are names that have been around for hundreds of years.

Early aluchaquins were strictly carrion eaters that would wait for the corpses of large fish and seals to wash up ashore to eat. Their faces became naked because of this, allowing them to feast comfortably by shoving their faces into an open body. The cold would drive them to make masks from seal leather to keep themselves warm, which normalized the idea of wearing masks so long ago.

Wrestling was also developed far back in the past, as their main defense from predator seals was to physically fight them. This form of fighting would later evolve into sport, the earliest forms of fighting for entertainment was between aluchaquin and trained seals. In current time, using seals in sport is less so popular than it was in the past.

Zico is an iceball of a planet. Most continents are made up of glaciers with only small patches of real land, with the rest covered in freezing cold oceans. These oceans remain mostly unexplored, as they are filled with dangerous megafauna that would readily eat any creature that dares come out into the open water unprotected. In the most recent years, there has been a sudden dramatic rise in temperature all across Zico, which has been shrinking the glacier continents to a disconcerting degree. As a result, a large number of the population has been leaving Zico in search of a new frozen home, in the case that Zico's global warming only worsens over the years.

• While not as serious as being mask-less, an aluchaquin with a broken off nose beak is also seen as a shameful display. Breaking off the tip of your opponent's nose is a fair move in the ring, and the winner will often keep it as a trophy, much to the dismay of the loser. Beak replacement surgery is common, and perfected so that the fact that the beak had been previously broken is hardly noticeable.

• Space faring aluchaquins tend to be more lenient on their normally strong held traditions back on Zico. Many simply practice fighting dirty, but a more recent striking trend is aluchaquins going mask-less. Other species don't find this to be quite as shocking as other aluchaquins do, but those who are 'casually nude' report it to be incredibly liberating. 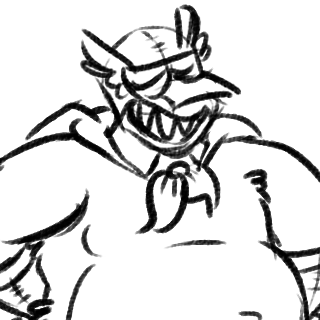 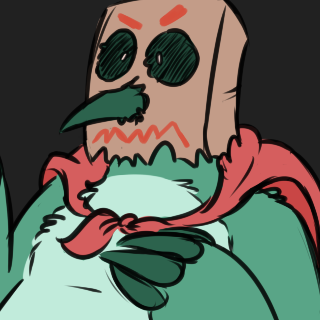 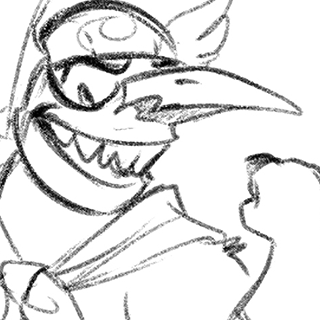