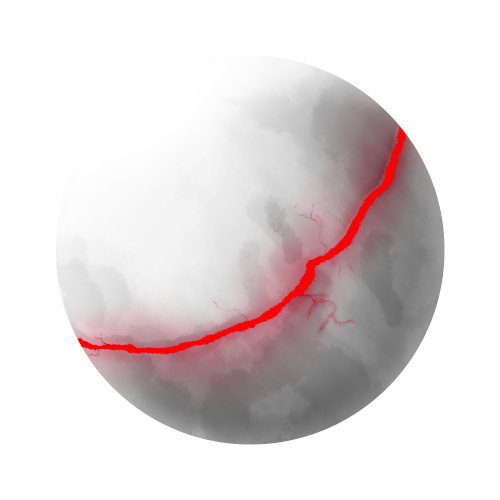 “There will be no arguements, we have a massive laser and the moon is just... there! Taunting Me with it's pristine undamaged glory.” — Research Director Vaegax

A chalky white rock barely larger than a particularly large moon. The planet's surface is mainly a vast expanse of white dirt and rock, broken up by canyons and hills at infrequent intervals, and with craters, both natural and artificial, dotting it's expanse. At the equator the surface suddenly gives way to a deep chasm, practically bisecting the planet and revealing the molten interior.

Dotting the surface are research facilities and factories of various sizes and too various ends, most of which are towards the development of ridiculous weapons of a myriad of sorts. Many of these facilities furthermore, plunge deep into the land forming a hidden network of tunnels and chambers underneath the plant.

The planet has, or well, had, one moon, which was blown apart by the test firing of a superweapon on the planet's surface some time ago. The remnants of it hang loosely in the sky and around the planet as a ring, forming a permanent reminder of the sorts of things being built here.

An unassuming white rock, Viparee, or VP-408-1 as it was known then, was deemed the perfect place to build and test superweapon by a team of vaeri scientists. So they bunkered down and established their labs and factories, at some point building a massive superlaser and blowing up the moon. Over time, other morally dubious scientists with an itch for destruction on a planetary scale flocked to the world and established their own labs and factories, and they further attracted scientists who were merely unscrupulous.

The Violet Lance: An R&D facility built around, and mostly dedicated towards, a massive, ridiculously overpowered laser cannon. Among the oldest facilities on the planet, built by the original colonists, and located in the north pole of the planet. It's this station which is responsible for the present of the moon.

The Terrordome: A biodome structure containing a habitat for all kinds of dangerous creatures, both naturally formed, and artificially manufactured. It's attached to an adjacent research facility which is dedicated to the research and creation of horrible monsters.

A Town: Definitely a real settlement filled with real people. This is in no way shape or form a simulation settlement designed to test the effects of whatever horrible things the local scientists have cooked up on a functioning burg. It's a real city with food and fuel and junk.

• Contrary to popular belief, the scientists are not responsible for whatever caused a massive chasm that practically split the planet in two. It was there when they got here.

-Back to Planet Menu-
< Vesper
Votum >