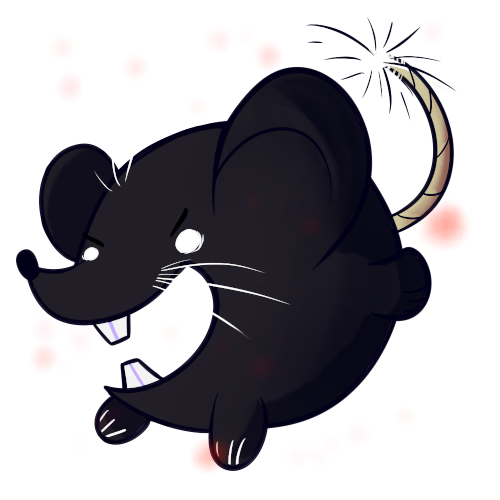 “Strap a bomb to a rat? Pedestrian. Combine a bomb *with* a rat, now that's SCIENCE!” — Dr. Fuzack

Attack Method: Run up in a frenzy and explode.

A creation of the eccentric, bomb-loving vaeri scientist Dr. Fuzack. The bombat is a large black rat, about six inches in diameter. It's body is bulbous and round, making it resemble a black-powder bomb wearing a rat-themed onsie. A resemblance is only enhanced by its tail which resembles nothing so much as a lit fuse.

The tail of course, has nothing to do with it's explosive ability, which it controls entirely of its own accord. Bombats emit a low whistling hiss noise as they approach, that sounds much like a bomb fuse.

Bombats are, quite simply, "tweaked out powder junkies." Unlike most creatures, and indeed, most rats, bombats display a startling lack of self-preservation instinct. Good for the bombats, who gleefully and unflinchingly charge to blow up anyone and anything that they happen to see, but far less so for the unfortunates who were counting on a concern for its own life to render them harmless.

To the relief of individuals who don't wish a explosion filled end, bombats are, for lack of a gentler term, incredibly stupid. They will, without fail, charge in without any regard or any degree of cunning, often barely mustering any effort to avoid retaliatory attacks by creatures that don't want to explode. Caution must be advised, as while the explosives in the bombat are completely stable while it's alive, when it dies, they tend to quite explosively decay.

Ratmore: A species of bombat created at the bequest of some military organization. Bobmats display a greater level of "tactical cunning" than their "civilian" counterparts, and explode more spectacularly. Physically they're distinguished by being more "square shaped", having camo patterned fur, and inexplicably be wearing be wearing tiny little combat helmets.

Cluster-Bombat: A spontaneous mutation of the bombat, the cluster bombat resembles an even more bloated black rat. When the cluster-bombat explodes, it releases a number of smaller bombats, that will, themselves, almost immediately explode thereafter.

• Bombats have been known to mistake regular black powder bombs, as other bombats, and often bring them along wherever they end up going.

• Some people are under the misconception that bombats can fly. For the record, it's Bomb-at, not Bom-Bat.

• According to popular urban myth, the reason bombats are so often found in "dungeons" in the middle of nowhere, is because Dr. Fuzack sold several hundred to the "Intergalactic Dungeon Crafter's League". Nobody, of course, can prove this even occurred, or that such an organization even exists.

• Unconfirmed reports state that, if you listen closely, right before a bombat explodes it utters the word "boom" in the tiniest voice. 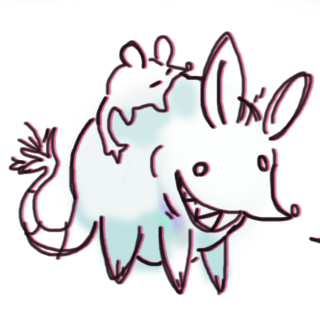