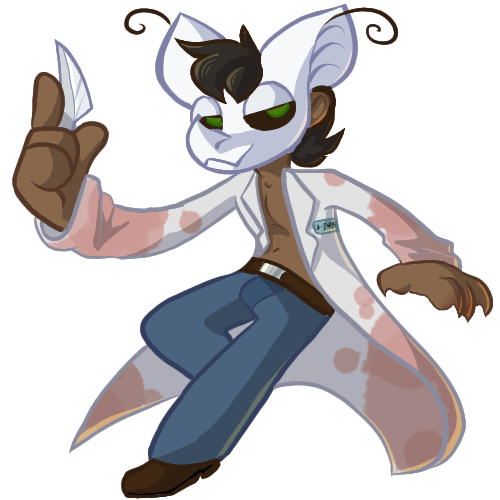 “I won a ticket to be operated on by STAB so i'm trying to get a real impressive condition before the surgery date.” — A notail, lightly coating themself in evofluid 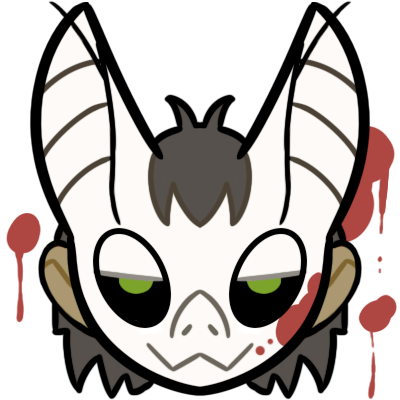 Job: Notail leader of the S-Class
Likes: Music, Interesting maladies, Bragging
Dislikes: Silence, Mistakes, Bowls of candy with the green ones not removed
Notable contributions: S-748 is the current leader of all S-urgeon class notails.

S-748 puts great care into his appearance, trying to straddle a line between showing off and looking carefree. His clothing often has dried blood on it, as if he had just gotten out of a surgery, but sometimes seems more as if had been applied aesthetically rather than naturally splattered that way.

He wears a bat mask with an upturned snout and two very large ears that his antennae poke out of. The mouth appears jagged and the eyes appear to have half-shut eyelids, with glowing dots coming from them, as if they were the eyes beneath.

Outfit-wise, he wears sensible and professional shoes, skinny yet comfortable jeans, and usually a labcoat. He does not tend to wear a shirt underneath, in order to show off his optimal physical health.

S-748, better known by his stage name, STAB, is well known for his well attended surgical and music performances. That is to say, performances in which he both plays music and perform surgery, in the same show. He's known to be able to change from cocky showmanship to complete professionalism on a dime, and just as quickly find the time to gloat and call for cheers upon performing a difficult surgical maneuver. S-748 is known in general to be cocky and self-praising, always quick to point out how impressive he is. Some argue this is earned, as in his recorded career he has never lost a patient on the operating table.

Aside from his more public demonstrations, S-748 is always happy to assist S-Class notails underneath him by demonstrating his considerable talent and help them improve. Those receiving his instruction have made note that he seems like he wants to make it very clear how much better he is than them, but also still provides quite valuable information and assistance. What really seems to get him eager, however, is opportunities to operate in ways he usually doesn't, such as on other species, or exceedingly rare conditions. He will sometimes lock himself away for up to a week researching before taking it on, just as confident as ever.

S-748 prides himself on his perfection. Whether it's a routine surgery he's performed dozens of times or something he's performing for the first time, he is well known for the almost impossible amount of skill he demonstrates. He attributes his track record to simple dedication. If he's ever uncertain about how to handle anything in an upcoming operation, he will not rest until he has a completely thorough understanding of what to do. Many close to him say he puts enormous pressure on himself, that the main reason he may never make a mistake is sheer willpower to not mess up. Some people worry about how he would take it if he ever did make a high profile error. Uncommonly, S-748 has caused notable property damage in hotel rooms during tours after particularly harrowing surgeries. He has always claimed these incidents are unrelated and simply strange circumstances, but would not elaborate. After all, it would be unbecoming to throw a fit like that in his position.

S-748 was a rather nervous young notail after leaving The Woods. He doesn't like to talk about it much, but testimonials of those that had met him then indicated that he had made some manner of mistake costing several lives, and became uncertain about their own abilities as a result. Which is not to say he did not have great skill at the time -- indeed, the technical merits of S-748 had been tested as being amongst the highest of S-Classes of their age. In an effort to get a grip on himself, he took to the stars, to try and "find himself."

What he found, most notably, was music. The varied styles he found on different planets interested him, and eventually picked up a few instruments himself, with some lessons from locals. It was learning to play music that he says saved him.

Playing music, S-748 discovered, was quite relaxing to him, and made him worry less in general. This newfound peace of mind led to him returning to medical practice, albeit on non-notails. Despite his renewed confidence, however, he was determined to not make a mistake like he had before. Much of his time was spent studying and learning the ins and outs of any given species he would be performing for, to not take any chances on having any sort of blind spot.

Eventually, S-748 returned to the notails. He had managed to gain a reputation already for his great skill in dealing with creatures with very different anatomy than he was used to, and his habit of playing guitar before surgery. The practice he had gotten then, as well as his new approach to calming himself, had proved to be just the boost he needed to work his way up the ladder of his class and gain even more reputation. As his reputation grew, so did his ego, however. People wanted to see him work, and he decided he was going to let them. Surgeries started being events, and events started selling out.

The then-current S-Class leader, S-407, was not particularly happy with this. S-748 showed talent, yes, but displayed no professionalism. S-748 butted heads often, declaring that so-called "professionalism" was not as important as doing the job well. He made it a habit to call S-407 out on every failed surgery they made. Things came to a head when in a meeting, S-748 declared he could easily do their job better than them, and doubled down on his claim by jamming a scalpel in S-407's throat. With his new position, he took a brief break from his shows to get himself acquainted with the additional duties of a class leader, before going right back to touring, and using his position to help promote his shows. The fact that he still holds the position today though, does prove that he hasn't let it negatively affect his duties. After all, he doesn't make mistakes.

Audience Command: Surgical audiences and musical audiences are usually very different groups of people. A musical audience is known for being loud and rowdy, whereas the audience for a medical demonstration is generally expected to be quiet and focus on the procedure. STAB is a talented showman and is very adept at taking his audience from high to low and back again, keeping them quiet when concentration is necessary, and encouraging loud cheering for showing off, or sometimes psyching him up. The audience always manages to know exactly what he needs for the performance.

• Acquaintances of S-748 mention that he had a phobia of needles when he was younger. He got over this while spending time soul-searching from planet to planet, when he elected to take dozens of vaccination shots on every planet to keep himself from accidentally infecting others.

• S-748 has been known to be harsh on S-Classes experimenting on D-Class notails, expressing distaste for the way they treat them as disposable. A death on the table is a failure, and simply calling for a new subject when one experiment fails is, at best, a waste of resources.

• When operating on other class leaders and occasionally O-Classes, most request that S-748 makes it a more private affair, but that hasn't kept him from trying to get such high profile people to guest as patients in his show when the opportunity arises. Past successes in these bookings have included O-5, Y-35, and O-11. 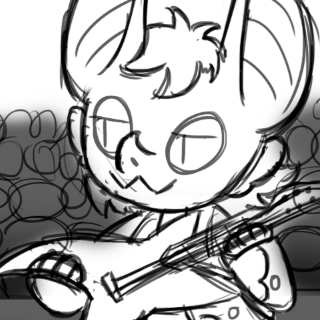