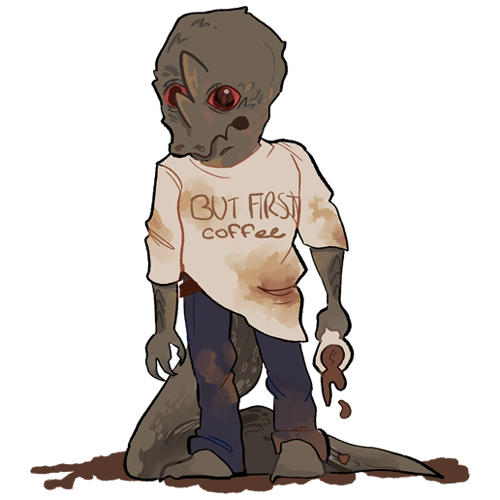 “I remember him. I had to lock myself in a closet to keep him from asking for more coffee.” — Cream, presumably

Job: Freelance Navigator
Likes: Coffee, Anything coffee-flavored, Going for a promenade, Travelling
Dislikes: Being deprived of his sweet caffeine, Drakons, Staying inside too often, Falling or being knocked over
Notable contributions: A funky fellow and good ally to have around. Knows his way around and becomes the life of the party when hyped up.

Abadeer is a strange, lanky reptilian fellow that most people would probably refer to as, at least when in public, "zombie-like". Abadeer isn't keen on moving to fast, and will typically stagger from place to place, which makes walking look like falling really, really slowly. He will also swivel and waver when standing completely still, and is prone to suddenly falling over without any rhyme or reason, and so he will typically pace back and forth (albeit slowly) to prevent this.

Abadeer's scales are a mixture between dark gray and beige and feel almost like rubber, and his red eyes are solid and dull. His torso makes up a rather small portion of his body, with his legs and arms being extremely long in exchange. Abadeer isn't too keen on fashion and will commonly just wear whatever he happens to grab first, usually resulting in some haphazard outfit. He is also seen covered in coffee stains and, in order from less to most rare: carrying a mug, coffee pot, or entire coffee machine with him in public.

Abadeer, at first, is not very talkative, and is very direct when he does speak. However, he is also known to rant from time to time if the proper situation is presented. He doesn't appear very expressive, but can actually be pretty emotional and easy to rile up. Despite his awkward behavior, he is actually very friendly towards most people, assuming he gets a chance to meet them. Of course, because of his off-putting posture and appearance, he has very few friends.

Abadeer's life has gone mostly unnoticed asides from a few reports of a "strange navigator whom reeks of coffee". The biggest event that surfaced regarding Abadeer was when he was anonymously invited to a party, got hyped up on too much caffeine, and nearly destroyed the establishment due to a nearby bonfire and party streamers.

A few comments from surviving partygoers include: "Best party of my life!", "I've never seen someone move so fast!" and "That dude is on fire, put him out!".

Overclocking: Abadeer's body is strangely resistant to caffeine, causing it to build up in his body over time. If he is able to ingest enough caffeine, equivalent to 12 cups of coffee's worth in under 2 hours, Abadeer will enter his overhyped state. While overhyped, every about him will speed up- his movement, his speech, his thought. Abadeer will become extremely quick, but will mostly lose control over himself and will have to constantly retain his focus or he might begin performing random actions. This effect will last between 10 minutes to 2 full hours, depending on how much caffeine Abadeer has ingested before or during his overhyped state. After this time has passed, his body will crash, rendering him instantly unconscious, and he will not awaken for at least another 9-12 hours.

• Abadeer doesn't really hate it, but holds a strange aversion to sugar. Usually he'll say something like "It doesn't cut it" or "It's not the same" when presented with something coated in sugar. Though, he is not picky and will still eat sugar foods if there's nothing else around.

• The Cosmosdex tried to find something, anything on this guy. As far as we know, Abadeer is the only of his kind, yet he always dodges questions about his species or where he has come from. Right now all we know is Abadeer really likes his coffee. Please consider this entry in the works. We will get down to what this Abadeer guy is all about. If you obtain any information about Abadeer, please contact the Cosmosdex. 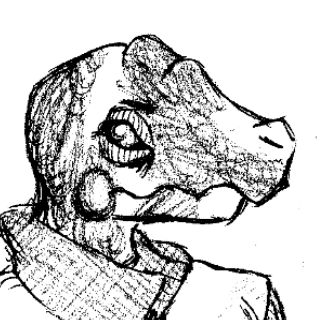