Cult leader / That one 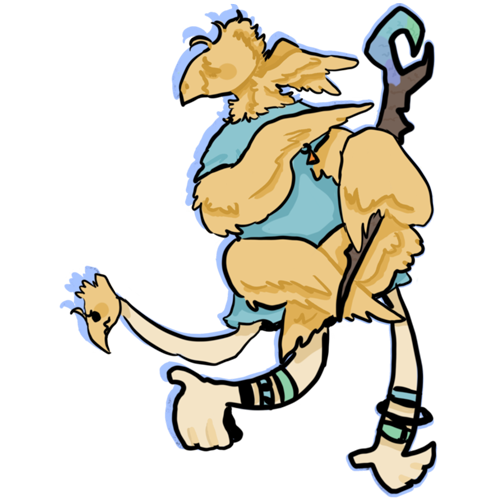 “Isn't it that guy who started an entire religion?” — A passerby

Nevra is slightly taller then most angels. They sport long golden feathers, usually not preened unless they would be planning to go somewhere formal. Though, they never really plan to go anywhere mostly just taking flight and seeing where they end up. Nevra seems to have an extra pair of wings but unfortunately those wings are unusable. Nevra has expressed a desire to surgically remove them, but can't because the wings are on the back of the neck and even if they are removed in even the best conditions can lead to death or long term trama. They usually dress in a very casual sort of way, like some shorts and a t-shirt. Nevra also bears many bracelets around their legs and a tag on their wing.

When meeting Nevra, one will most likely notice their excitement to be in a new place. Nevra will often travel with tourists for a short while if allowed. They travel often, being hired as a part time crew member or to go on explorations to find more planets or species. They try their best to stay in line, but aren't against the occasional fight. Nevra doesn't particularly like getting attention, especially from monocerii. Nevra says they see that event as a mistake and regret it immensely. If mentioned to them or as a possible reason for hire, Nevra will most likely quit.

Nevra says they had an average childhood for an angel, being raised by their parent then leaving. They remark they had an interest in traveling since the beginning. One of those times, they happen upon a populated planet. That planet was Barheh. They landed there and took pity on the monocerii, who were going through an extreme shortage of food, supplies, ect. Nevra would teach them things and stay around for a while. So, eventually a couple generations after Nevra left the planet for good, they started to worship them, and to this day they still do.

• Nevra is very humble and don't see themselves as anything holy.

• They may be seen traveling with a Prometheus AI when not on the job.