“We owe him everything. Nobody else came, nobody wanted to stop these thugs. Everyone was too busy, or we were too poor for a reward, or that we had it coming for being who we were...” — Unknown soothal peasant

[Storyteller] Neutral trait
This character could spend hours telling stories. These stories range from personal life stories, to myths, but rarely things like gossip.
[Stone-Faced] Neutral trait
This character shows a lack of expression, or is able to switch from being expressive to having a lack of it. This character can be hard to read for both friends and foe. You may also be unable to see the morale, sanity, and general feelings of this character in the crew logs.
[Brave] Positive trait
This character will answer the call to adventure more often than not. With this trait they are more likely to run into places with more loot to be found. This character is less daunted by certain situations and morale is raised whenever they're put in an adventurous situation. This character may have fears, but they're willing to meet it face to face.
[Determination] Positive trait
This character doesn't lose morale as fast and commonly is passionate about what is being done. They will find a way to figure things out in even the toughest of situations. They cannot hit lower than 0 morale.
[Never Lies] Negative trait
This character just can not tell a lie, even if it's a white lie, or would be detrimental to tell the truth. If they are ever forced to lie against their will, they will take a large sanity hit, and may continue to worry about it until the truth comes out.
[Doesn't know when to give up] Negative trait
This character is too confident in their abilities and is not realistic about how dangerous or challenging something may be. They may take on tasks they cannot do, or put themselves or their team in dangerous situations because they think they can handle it.
[Hero Complex] Negative trait
This character is easily moved when they see somebody down on their luck. While this character may end up making some friends this way, they will end up helping others even if they can't afford it. This character suffers severe morale losses when made to be "mean", but doesn't feel any obligation to be nice to villainous people.
[Last Stand] Ability trait
Whenever this character receives what would be a fatal blow, they gain a +5 to Strength and Endurance, and +3 to luck, and may help defeat the enemy(s) that dealt the blow. When the fight is over, the character dies. Cooldown: Only activated upon receiving a would-be fatal blow.

Mamlinar is a person of unknown species and origins, easily identified by his blue carapace and long, shaggy mane. His chitinous face has deep-sunken glassy eyes, which swivel around wildly as he talks, since he has trouble seeing stationary objects if he doesn't. His voice, once booming and strong, however, now reveals his age, quavering and hushed. The near mirror-polished armour of one-white metal which he is often found wearing is patched with many years of repairs, dozens of holes repaired with slightly different colours of white, making the plates seem mottled in the light. When out of the armour in soft green tunics, it is apparent that he is still severely burned from an event long-since passed, scarred and damaged all along one side of his body.

While the place of origin of this literal knight in shining armour is unclear, what is clear is that Mamlinar is a crusader for justice. Those who have met him outside of the fray often remark on the sheer earnesty that runs through his tone, and those whose encounters with him were under rather more dangerous circumstances say that there is a braveness and swiftness of action that belies his usual slow and methodical speech. He is cold and distant, but polite, to those who have carried out what he thinks of as "evil deeds", but is slow to rise to violence unless someone else is threatened.

While he is keen, when recuperating from his latest venture, to tell the stories and battles of his youth, he is particularly self-effacing, often telling the tales in the third person, as if describing a far-off and unobtainable hero instead of his own self. Those who interrupt him in a tale are merely met by off-puttingly whirling kindly eyes and a patient expression, but it is known that he takes offense at these interferences despite outward calmness.

Mamlinar is famed for his endless mission to protect the small people of the universe, those who are otherwise left alone and unlooked for, with no help and no chance. He throws himself into these with abandon, usually taking severe injuries and shots in the process, whether it be pulling children to safety under the gunfire of pirates, or protecting small villages from the depredations of wild beasts.

Despite the almost suicidal and self-destructive nature of this mission, barely allowing one set of wounds to heal before charging into the next, he has always refused to become involved in wider universal affairs, even when many people are at risk. In a rare interview on the matter, Mamlinar said that "I must not cast my net too far... There will be other saviours, always heroes to stop these people... but nobody thinks of the small ones I help. If I fall now... who will care for them?"

His hammer great, the mountain slayer
The tumbling waterfall his hair
A knight from shining court was he
On pinnacle above the sea
When all was fair and ever day
In steel-blue Siman Nuliei

The world was young, the seas still barred,
But tremors soon the lands had marred
And from the fortress ever-blue
He rode unhesitant and true
And nevermore again was seen
Through forests grey and meadows green

Not in the mountains high, or low
In deepest caves may any know
Of any hint where might he lie
While glints his star high in the sky
For through the fiery gates he passed
And saved us all, with breath his last.

But still his star shines night or day
On steel-grey Siman Nuliei.

Flickering Flame: Mamlinar may have been the greatest warrior of his day, but he is growing weak in his old age yet refuses to admit this, even to himself. His powers may be less than they appear, and their true value will be concealed until he fails a check with them.

• /*editor note: Mamlinar was reported dead at the evacuation of Haven Hope this morning, we'll rewrite and update his entry later once we have it confirmed.*/ 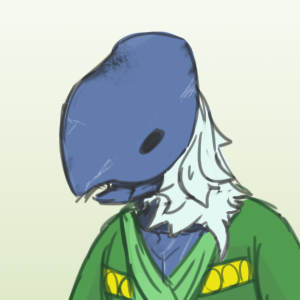 -Back to Legendary Menu-
< Majesty
Martee >