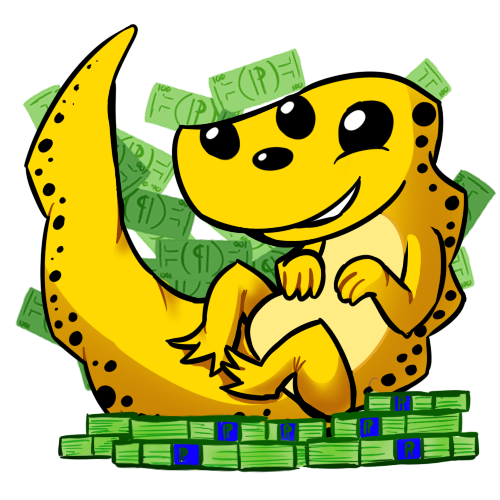 Common Jobs: Pets, Anything easy, Anything dealing with the exchange of money
Likes: Money, Being petted on the head, Being fed, Being pampered
Dislikes: Being Poor, Insults, Hard work

Attack Method: Unable to risk their life, a geckrechaun opts to flee first, bargain with money second, and only fight in the direst of situations.

Geckrechauns are highly dedicated to their god the Sleeper. So much so that their city on Geckon surrounds a statue of their sleeping god. This statue is surprisingly lifelike and slumbers on a pile of gold and other riches that the geckrechauns bring in hopes of their god giving them more luck.

The geckrechaun is a small, impish, gecko-like creature. They come in a variety of scale colors, body shapes and patterns, which makes them interesting pets. Geckrechauns are short, with most standing at a squat 3 feet tall. One must be careful with petting the head of a geckrechaun as it is a little known fact that some of the spots on their head are in fact one of their 3 pairs of eyes.

To some, calling the geckrechauns greedy is an overstatement; to others, an understatement. What both parties can agree on is that there is nothing in the universe the species loves more than money. The geckrechauns only live for a short 20 years, and from the moment they are hatched they are on a mad dash to obtain as much wealth as possible. They laugh in the faces of those who say that money cannot buy happiness.

Traders by nature, the geckrechauns travel the universe, selling their goods. From the humble trader of worthless knick-knacks to the great planet salesgeck, this species can be found in all sectors of trade. They have a remarkable capacity to learn quickly, with most completing their studies by the age of five.

If one asks a geck why it works to amass currency, they will respond that it is for a simple reason.

A chair is just a chair, but money can be anything it wants to be if it is gathered in certain ways and shown to the right people. Money is the form of unlimited choices, and sometimes a geckrechaun has a hard time deciding what they want. They will pile up their money, watching the numbers rise until they can buy anything they want and more. To some, this is all they need in the universe, just the assurance that anything they see can be theirs if they want it.

Geckrechauns do have an odd tradition, one that is considered questionable at best to many in the universe. The first hatched from their eggs is sold into the pet trade. This is considered the biggest honor to a geckrechaun, as becoming a pet means one does not need to work and shall have their every need cared for. To them, their owners are servants and there is humor to be had in the idea that anyone would take care of such a pet, as economics-savvy pets are worthless, harmful even.

Despite the heavy restrictions on the pet trade, it is extremely popular due to the wide amount of color morphs and patterns. As every pet geckrechaun must pick their own mates, they are often put on dates with others by their owners. Most are rather casual about the whole event, but owners are always on edge, as even one picky pet can end years’ worth of breeding projects for the perfect color morph.

If an owner cannot take care of their geckrechaun, they must bring it to the homeworld, Geckon, and release it into the megacity to find a place to belong.

The geckrechauns were not the first sentient species to exist on their planet. Known only as the "Keepers", these insectoid species adopted the geckrechauns as pets after their seemingly sudden appearance. While there are no records of this time period, stories passed down say that the Keepers became sick and died en masse, leaving their beloved pets behind. Forced to survive without their ever-protective owners, the geckrechauns struggled to live in the ruins.

It would be many years before another species would come to care for them, this time from the stars. As soon as they spotted a potential new owner, the geckrechauns acted like dumb but cute pets so they would be taken into space.

Those who were not adopted became upset. They realized that because they could not be pets, they would have to find another way to gain incredible amounts of money so that they too could live pampered lives. Geckrechauns were told to learn all they could about money-making and come back with the information. An event that greatly boosted the knowledge they gathered was when geckrechauns traded many members of their species as pets to the volkronns in exchange for a few ships, which were hard to obtain at the time. The volkronns felt they were getting an amazing deal, but the geckrechauns came out on top, winning from both sides.

The pets would learn universal economics and bring it back to the others when they could. With the ships, the geckrechauns were about to get an early and strong start on setting up interstellar trade routes. This, coupled with the fact that the species were charming compared to their competitors, the volkronns, made business easy.

The geckrechauns have kept their early lead and remain one of the richest species in the universe, allowing all to have a chance at the geckrechaun dream: being pampered like a pet.

The geckrechaun homeworld, Geckon, is noted as being a capitalistic paradise. There is only one mega-metropolis on the planet, which everyone lives in. Careful city planning has made sure that most of the locations are not crowded and that plenty of parks can be found for geckrechauns to bask in during their breaks. At the center of the metropolis is a large hole, too deep to see the bottom of, especially as the tallest towers on the planet crowd around the edges, blocking out most light. In the hole is the statue of the god of the geckrechauns, the Sleeper.

Though the artist of the statue is unknown, and it is believed the statue existed before the appearance of the geckrechauns, the craftsmanship cannot be ignored. Every detail is perfected to a lifelike degree. The geckrechauns toss their excess wealth down the hole and to their god, where it accumulates. During times of inflation in the market, geckrechauns have been known to toss such a large amount of money that the economy begins to correct itself and the inflation returns to normal.

Physical points are rare, as there are few uses for them; thus banks often make taking them out a hassle that requires an order be sent out days in advance. Near the Sleeper pit, however, many banks have set up locations filled to the brim with physical points so that geckrechauns can toss their money down the pit. Most of the banks make people sign an agreement that the money taken out is going into the pit. Some of the fancier banks have lavish viewing rooms where the tosser may press buttons to deduct money from their account and watch a machine shoot it out and into the hole.

After a long enough time without a large number of donations, the money in the hole starts to recede. While there is no officially listed reason, it is guessed that the government removes the money at some point to avoid overflow or rampant theft from visitors.

Mutageck: Evolved from the original geckrechauns sold to the volkronns, this subspecies is like their owners, highly mutated. Traditionally just considered pets, mutagecks can still be found outside of ownership, using their mutated talents for work. Getting special mutations on a mutageck is an art form to the volkronns, with one especially well-mutated specimen going for an excess of one billion points at auction.

Quick learning: Geckrechauns learn new skill sets amazingly quickly. Even pet geckrechauns often know how to speak and write, only needing tools and a video boxset of "Geckie's Words" to learn both tasks in a few months. There exist films for many household skills. Forcing a geckrechaun to work is illegal, but a happy pet often doesn't mind helping out. It is recommended for all owners to pick up "Geckie's taxes" and sprinkle the tax forms into their pet geckrechaun’s tank afterward.

• Attempting to force a pet geckrechaun to do work is considered a crime and will cause the owner to lose any geckrechaun pets they might have.

• There is no fossil evidence that links geckrechauns to any other species on the planet. In fact, there is very little reptilian life to be found on the planet, even today. Considering the detailed statue of a lizard god is central to the planet, it is unknown how the Keepers managed to create it. 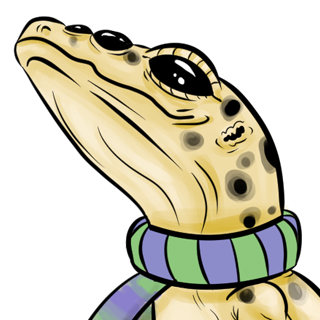 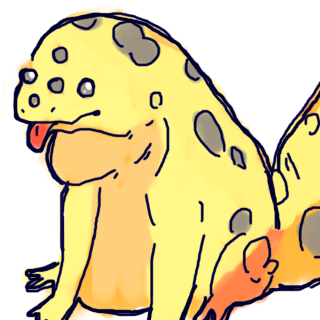 -Back to Species Menu-
< Garduian
Geiger >