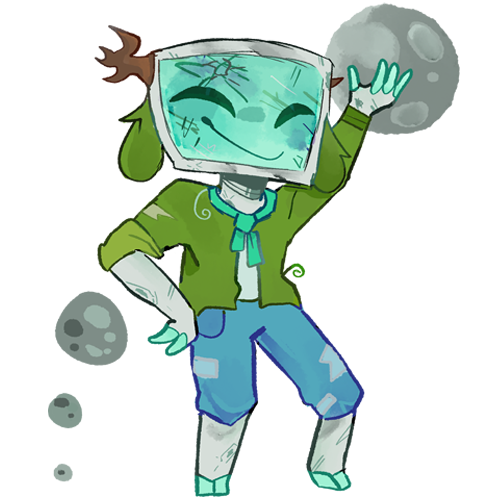 “Steal from the rich and give to the poor! Ten moons to your planet? Not no more!” — Artemis v31, to the leaders of a planet as she was flying away with one of their planets ten moons.

Job: Moon thief
Likes: Moons, Notails, 'Derek'
Dislikes: Apollo Units, Planets with too many moons, Those who seek to stop her from relocating moons, Mirrors
Notable contributions: Being a notoriously hard to catch thief of moons for over 125 years.

While at a distance, Artemis v31 appears to be a typical artemis unit, on a closer glance, several things that mark her as unusual can be noticed. For one, her rather incredibly short height, not just for an artemis but in general, for another, her generally beaten and battered look. She looks as if the only thing holding her together is duct tape and a dream, horns broken, chassis dented beyond all hope of her repairing it herself, screen cracked to the point that it barely functions.

However, the final part of herself that stands out is her appearance of constant self-assurance. No matter the circumstances, she always seems to have things 'under control' despite whatever fears she may have beneath the surface, always ensuring those around her that whatever situation she is in will turn out in her favor.

A rather cavalier, yet cheery fellow, with rather unusual priorities. Despite her cheery attitude, if any conversation heads in the direction of moons, she is certain to ensure it stays there. To her, moons are everything. Their beauty, symbolism, moons are her world. She despises any "imbalances of lunar activity", doing anything she can to correct it if a planet has too many or too few moons. Still, when not speaking of moons, which is rare, she seems merely like a childish, if somewhat odd, artemis unit.

While she does not have much of a 'history' per-se, she does have a criminal record, and is proud of it. According to her, her most fondly recalled heist is the 'great theft of Argus 18', in which she managed to relocate every one of the 100 moons in the system to other planets WITHIN said system before being forced to make her escape.

Emergency Wipe: In situations of high stress, Artemis v31 has been known to wipe relevant memories in order to cope. On multiple occasions, she has wiped all but her core files, and a set of memories that she claims are kept in a folder marked 'Important Shit (NO DELETE)', which tell her to go out into the universe, and continue her mission of equilizing the moons of the universe.

• According to her, the optimum number of moons is 'somewhere around 3'.

• She has a habit of calling any Selene unit she meets 'bosslady', before correcting herself. Whenever asked why, she always ignores the question entirely.

• She is a member of a group of other Artemis, and Diana units, who often discuss planets that have unsatisfactory numbers of moons. She is not the only one to steal moons in a strange crusade of equalization, but she is notable for her extreme devotion to this cult-like act.