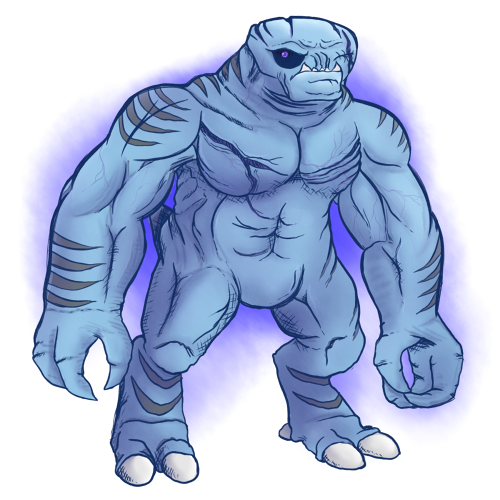 “Never in all my days have I seen something so stupid, yet so capable of inspiring such fear and respect.” — Barcus, big game hunter

Attack Method: Smash it, preferably with a club of some sort.

A large hulking blue cyclops, whos singular black and violet eye is off centered in their hammer shaped head, typically to it's right, but sometimes to it's left. Their power arms have three digits apiece, two fingers and a thumb, and their double jointed elphantine legs, have a mere two toes to them. Their skin is various dull shades of blue, the most common being a light sky blue, but darker azures are not unheard of. Their body is decorated with stripes which vary in color and design from.

While females of the species are uncommon to the point of myth, they are very similar to males and are distinguished mainly by their body being generally narrower and their head more trapazoidal. Females also lack the noted stripes.

Tenacious, and single-minded, the azureclops is a stubborn, mildly intelligent brute with a certain of clever cunning. When an azureclops sights it's prey, it will stalk it until it has captured it, and there is little one can do to deter from it's course, save perhaps demonstrating oneself as an easier to acquire, but this is not advised.

While agreed to not be properly 'sapient' azureclops have displayed a burgeoning intelligence, such as by developing tools and weapons, and building traps. They also display the beginnings of what could considered a 'culture' though most agree it's far to early along to reconsider any feelings about them.

While generally solitary, azurclops occasionally gather into small 'gangs' led by a single alpha azureclops. When in such a gang, azureclops display a frightening degree of coordination that can overwhelm even a fairly well trained military unit if they get careless.

Crimsonclops: An attempt to create a more powerful and violent azureclops, the crimsonclops succeeded quite well. It's a hyper-aggressive berzerker, with a monomaniacal focus to destroy any living creature or robot it sets it's eye upon. Distinguished by it's larger build and blood red skin, the creature is a terror to behold.

• Azureclops are popular among the universe's criminal underground and military institutions due to their great strength and relative ease to handle compared to certain other popular alternatives. 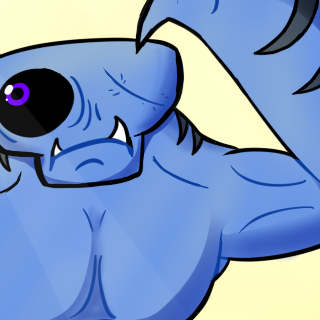 -Back to Fauna Menu-
< Arise
Baudette >