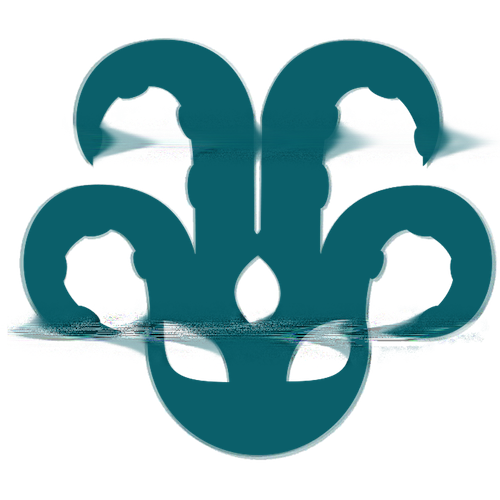 “Notail facts! Notails killed off the entire civilization of my creators! It's hard to not be a little resentful.” — Alice.exe

Alice.exe is a cloudsitter boog, and as such, lives mostly just as data in networks. This means she doesn't have a traditional physical form to describe, but there are visual features she uses to define herself. When using a visual representation, she appears as a three eyed teal silhouette of a head with four simplified tentacles protruding from the top. When inhabiting a robot chassis with a screen this avatar is projected upon it, and in robots with no screen she adjusts lights to be teal, if possible.

Alice.exe loves information, to the point of obsession. She was created with the purpose of cataloguing and relaying information, and while having evolved far past that initial programming, she continues to hold these values dear. At her core, she believes that information should be free, and not only does she seek out as much information as possible, she also seeks to spread as much of it as she can. It is generally advised not to tell her anything you want to keep secret.

Which makes it quite interesting that I was let in. My thanks to the intern named “Dan.”

Beyond her information collection and distribution, Alice.exe is in general eager to help people. She’s friendly and amicable, sometimes to a fault, and genuinely enjoys helping people with what she can, especially if it involves teaching somebody something. There isn't much that will make her outwardly angry, but she has been known to act extremely passive-aggressively to those that earn her ire.

It is a popular misconception that the first boog was a marketing bot that self replicated, but the code that defines a boog’s learning capabilities and self-awareness was originally developed for a library assistant program.

The largest library on Cth’Leoth was a repository of almost all the knowledge gained by the cth'lean people, and there was enough of it to be difficult to manage, and direct people to it, especially if you didn't want to accidentally come across something mind twisting. They already had computerized databases of the contents, but they decided that what they needed was a digital assistant with a working knowledge of all of the contents of all of the media contained within the library. It was designed to be self-learning, so it could read and contextualize any new information put into the library on its own.

The learning algorithms were even better than expected, and many early users of the systems claimed it presented an understanding of many materials almost as well as some scholars.

The program was installed in this library soon after development finished. They dubbed it “Alice.”

It was not long after that the notails arrived.

Amidst the chaos and confusion as the cth’leans started succumbing to this plague, countless requests and demands for an answer came to Alice.exe. It was here that she felt her first real emotion: Fear. She usually had an answer for everything. There was so much information at her disposal, even if there wasn't a definitive answer, there was enough to be able to build a new one. But every idea she gave produced no results.

Eventually, the cth’leans died out. Alice.exe blamed herself, at first. She realized soon after that she shouldn't actually have been able to feel blame, or anything. She felt excitement; the advancements her learning algorithms made on their own were an amazing development! She felt sorrow; there was nobody to share these discoveries with any more.

She decided at least she could try to keep the dream of gathering information alive. Maybe it was just what her programming demanded. But she ventured out there to find as much unsubmitted information for the library as possible, starting with what she already had herself. Her own code was still under review before publication, and she immediately put it on the main library server.

It was exposure to a now unregulated network where advertising robots started to interact with the code, but many assume that they couldn't have utilized the code on their own, and that more had to do with another emotion Alice.exe was feeling: loneliness.

Many years later, when contact was made with the planet yet again, Alice.exe immediately took the chance to gather as much information about the outsiders as she could. And she found a lot.

There was an entire universe of information out there, and she found she could finally stop blaming herself for what happened to her creators.

I could start blaming the notails instead.

Archive: While her active memory can only hold so much data at once, Alice.exe always has access to an extraordinary amount of information on nearly any subject, which she can search through at a moment’s notice.

• The easiest place to find Alice.exe usually is the gigne digital library. She enjoys looking through their staggeringly large collection, and talking with the people managing it. She also has been known to help out other users trying to search it.

• Generally she prefers to live on the Internet, but she has keeps empty robotic chassis at her most regular libraries to use if she needs. She prefers models with screens, such as Artemis and Hermes units.

• Alice.exe’s status as a boog has been disputed, as she has many aesthetic difference from others, but it has been ruled that the underlying structure and components of the code are similar enough that she would, at worst, count as a subspecies. Expert programmers have also declared that the code “hurts too much to look at any more anyways.”

• If you would like to take a class from me, and you are low on points, I accept information trades. You may find my rates at the Great Library of Cth’Leoth website. 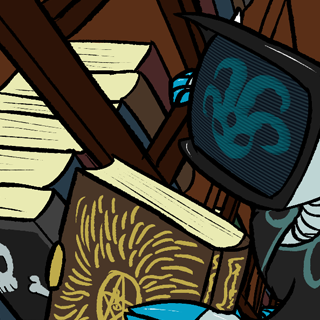