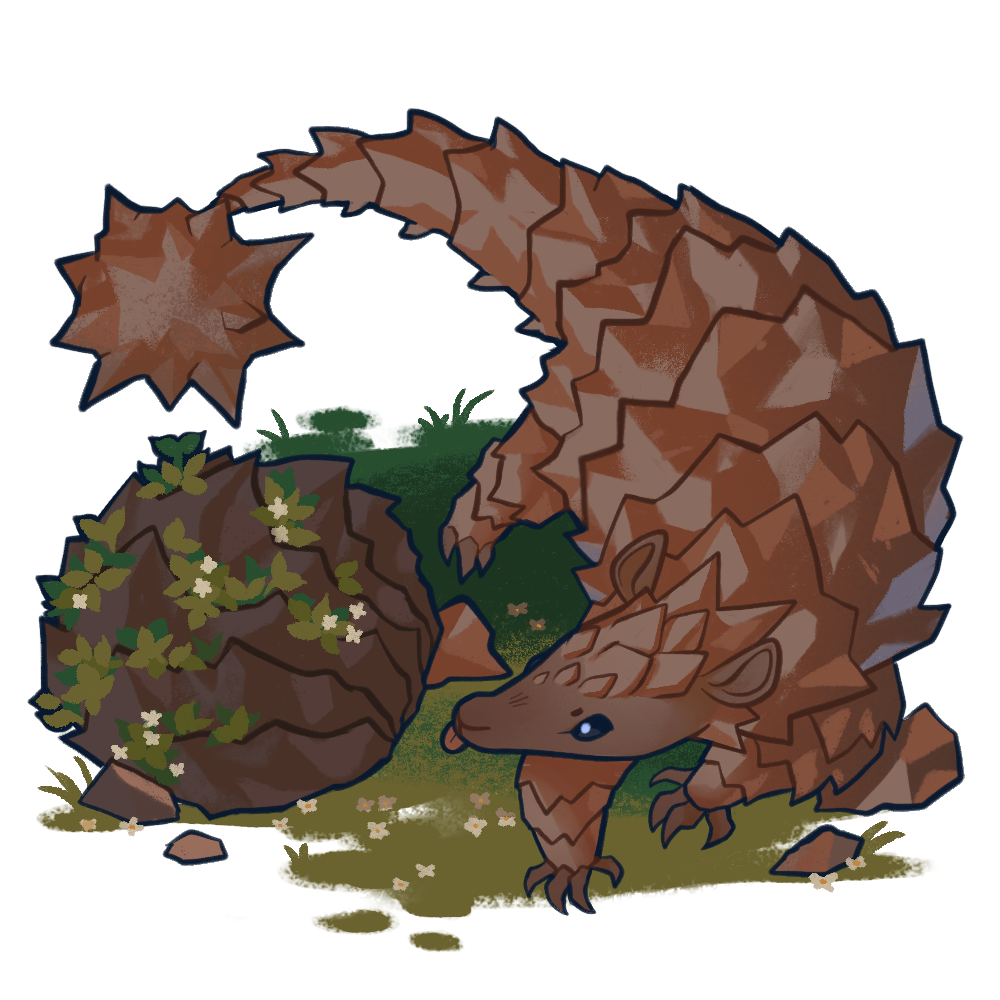 “Ow, this rock stabbed me! Since when are there sharp rocks in my field?” — A farmer discovering an abundance of lorilal and a mess

Attack Method: They simply curl into a ball hoping their spiky exterior deter enemies. Though if an enemy persists they will try attacking with their tail.

Lorilals are small armored quadruped mammals that are covered in long spikes and scales. Within their spikes contain seeds that don't do much but are for good eating. They are low to the ground and can curl up into balls when needed. When curled up they're usually mistaken for spiky rocks. They have long snouts which are good for rooting for bugs or making holes to deposit seeds and with long claws, they can dig holes too. These creatures also have a rock-hard spiky club at the tip of their tails.

Lorilals usually stay away from other creatures and mind their own business, even giving space from other lorilals except with close family members. They birth their own pups live, usually having three to four at a time. When newly born they are safe to handle as their spikes are soft and flexible, a feature that changes as they age. They usually spend their time rooting for their next meal. While not lazy, they prefer to go at their own pace. They enjoy collecting and spreading the seeds of certain plants with a perpose. Once sprouted the lorilal consumes the now much easier to digest plants, while continuing the cycle by collecting and spreading its seeds once again.

They adore living on farm land and will lose the grumpy attitude towards farmers to better their chances of sticking around. Lorilals usually makes more of a mess as they dig up fresh dirt to grow weeds but if tamed they can be given new seeds and will gladly start planting those instead. While messy workers they help revitalize land that isn't typically able to be used due to over production. Even on small-scale farms and gardens where they don't plant a lot, they will help deter any other fauna or unwanted hands trying to steal with their spiky bodies.

Boldems: A big cousin of the much smaller lorilals, the boldems are described as being an almost boulder-sized creatures. While they lost their defensive spikes and adapted to be smoother, they still kept and improved upon their club tail. Luckily this fauna is discribed as a peaceful giant,spending most of their time seeking a meal. While lorilals are busybodies, these guys are pretty lazy. When sleeping they will curl up causing onlookers to confuse their forms with those of rocks.

• Lorilals and boldems were first discovered on their home planet with the bloomins and cordymins species. It seems they had both evolved and were symbiotic with one another.

• While they may be good at planting seeds and guarding plants they can also withstand being thrown. The action isn't appreciated.

• When happy they tend to wiggle and shake their tails so watch out! They may be small but those club tails can leave a nasty bruise.

-Back to Fauna Menu-
< Looksie
Lucigris >