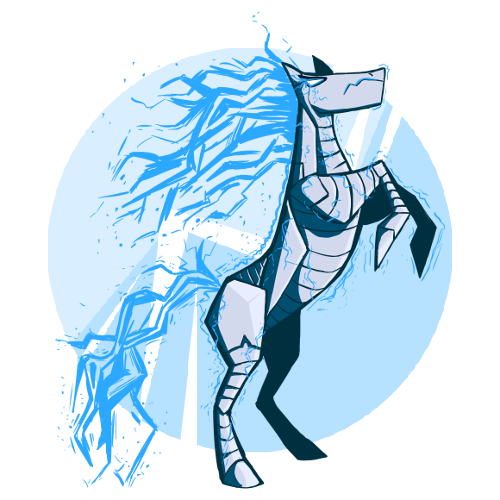 “Never have I seen so magnificent I creature, I'm positively light-headed with awe...though that might just be the nausea.” — Unknown Horzz Enthusiast

Attack Method: Stamping and kicking with its hooves like a regular horse.

A magneto-horzz is essentially a horse, a metal horse of unparalleled majesty and excellence whose mane and tail are streaks of lightning and whose hoof-falls sound alike to thunderclap. A horse who's eye's streak blaze with blue energy and exhalations electrify the air. But still, essentially a horse.

A magneto-horzz doesn't act significantly different from a typical horse. They enjoy galloping, eating, mating, all that good stuff. They tend to be more prideful and stubborn than most horses, but as a consequence make all the more loyal companions.

Plazma-Horzz: Largely identical to the regular variety, except instead of electricity, it emits fiery plasma from it's various accoutrements, up to, and including, breathing fire. Plazma-Horzz have a much weaker EM field as well, but compensate by simply being very hot, not that one would notice as they are generally found in places that are already very hot to begin with.

Mechano-Horzz: Believed by some to be the original form of the magneto-horzz, the mechano-horzz, is basically just a mechanical horse, powered by esoteric, purely mechanical means, making it largely immune to it's cousin's abilities in spite of it's own lack of such abilities.

Electromagnetic Field: Magneto-Horzz emit a field of radiation that, while mostly harmless to fully organic creatures causing, at worse, mild nausea, can wreak havoc with electronics, such as robots and cyborgs.

• While it's difficult to tell, magneto-horzz are in fact, cyborgs. They do, indeed, have fleshy bits encased inside their armored forms.

• Sometimes, when a magneto-horzz dies, it explodes in a magnificent display of light and fury, this is a very dangerous thing to be around naturally, caution is advised