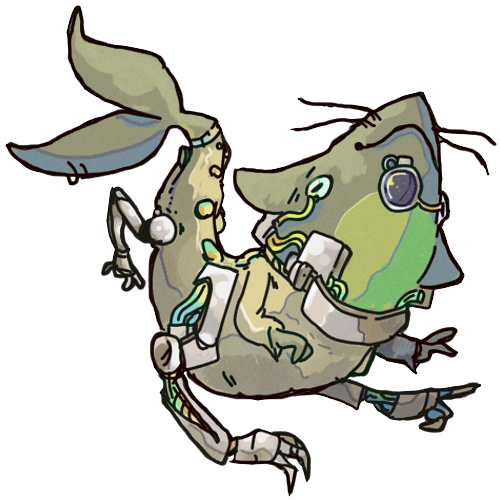 “It was dark, his attention was on the card game, with his neck exposed, and nobody else around. That neat jacket he was wearing was practially mine for the taking. But alas, he was recording, and now I am here. That is all there is to say on the matter” — Delfel Zutrorom, convicted murderer

Attack Method: Distract opponent while drones line up a killing blow/shot. Preferably all from farther end of their control range.

It is safe to assume they don't have any gods, and anything they contrary to that fact is a lie meant to manipulate people in some way or another.

Richife are fish that had evolved a set of gripping appendages; a pair near both the head and tail, respectively. They possess prominent whiskers, and twin dorsal fins that peak at thier head as a crest. The length of the crest and whiskers vary greatly from individual to individual. They have a lighter under-belly.

All richife have a roughly stack-of-two-bricks-shaped electronic device embedded near their brain, usually between the start of their dorsal fins, and designed to look like an angular hat. This main implant assists brain activity, and is grants them intelligence and sapience. Richife without this device are effectively, and in some cases legally, fauna.

Their cybernetically-granted sapience, along with thier competitive nature, has led to being very accepting of additional augmentation, and one can expect find richife with additional cybernetic eyes, limbs, antennas, breathing apparatuses, and etc.

They prefer to wear fine clothes in light colors, or failing that, clothes that resemble fine clothes. Even rags and woven plantlife is preferable to the nudity of animals.

The richife live to serve. They are orderly, tidy, efficient, and often control drones giving them more hands to work with. In addition, they are usually skilled planners and leaders, fully able to keep your domicile in tip-top condition while you are busy with your own life.

At least, that's the usual spiel. In reality they are natural plotters and schemers, having little to no care for most individuals that are not them. For them, life is just another game, one greater in scope than any table can hold, and where the only rules is what is physically possible. Their following of laws is a deliberate choice on their part, accepting the strictness of laws in turn for being allowed to purchase goods and receive services such as police and medical.

Of course, punishment for breaking the law requires law enforcement both be aware of the crime, and the richife's committing of it. As such, breaking the law is a legitimate move, the benefits in return for risk of punishment. For a richife, all things are risk, value, and the balance between such things.

However, they also have difficulty thinking ahead, beyond the conclusion of their plans. This can result in them being stuck; stranded in middle of unfamiliar or untraversable locale, in the kill-zone of a trap for their enemy, five feet away from an armed person who wishes them dead, etc.

From what can be determined from account of varying accuracy, content, detail, and verifiability; The richife were a non-sapient species that was found by another, highly intelligent, species. The creation of their main implant, and the station orbiting their planet, can be attributed to this unknown species. Upon discovering the implant's success, the visiting species started training richife for a future as housekeepers, while testing their new intellect with a tabletop game that, for all intents and purposes, it'd be easier to call it chess.

Eventually, the richife noticed there was no rule stating that killing the opposing player was forbidden, and proceeded to coordinately slaughter the entirety of the visiting species on the station.

With no masters, and not much else to go on but the rules of chess and the other games the station had, they eventually came to their "life is a game" mindset, and proceeded to play. Eventually, several richife realized that cooperation yielded greater returns than competitiveness alone. And thus the 'society' ruleset was developed, and the richifes flourished.

Henshaw is mostly ocean, with nine small continents containing very little animal life on them. Most of richife civilization is located underwater, with a few towns on the surface for space tourists and locals to meet and experience each other. The space station orbiting the planet has a similar spot, as well being historical local tourist attraction, and further research.

Unmodified / Feral: Richife that, for one reason or another, have not rcieved an implant, often just because they weren't lucky enough to been born from an intelligent richife, or picked by one that can afford the costs. Any interruption in the brain implant's operation can cause a richife to revert to this, but they retain some rights as person, and overall it is treated as a temporary condition, even if the implant is broken.

Amphibious: Richife that have decided to stake thier fortune on dry land, getting breathing apparatuses installed over their gill to facilitate living above-water, mechanical assistance to their limbs for easier land-based bipedal movement, and often a cybernetic eye in the bottom-front of their neck to allow further downward vision, as their necks only bend down enough for them to look like their head is turned upward if one assumes they have regular humanoid anatomy. These are the kind most often encountered by everyone else in universe, and thus amphibious attachments are often mistaken for common for richife as a whole.

"Bloodied": Richife that either reject society, or who have been rejected by society for lack of respect. They are even worse than regular richife, not letting any law stop them from killing whomever, stealing from whomever, and doing whatever they please. Bloodied occasionally have societies of their own, but they are governed by the force of it's rulers, and can easily fall apart when even one of the ruling party is downed.

Despite being characterized as savages by their more, 'civilized' counterparts, they share the same tastes. Common, 'Spotless' richief call them the Bloodied, as they wear blood-colored apparel to help hide any blood that might've got on them, and that's the only distinction they haven't been willing to disrupt. Common richief, in turn, call themselves 'Spotless', implying that they have no blood on them, or atleast, they can bother to replace blood-stained clothes. 'Bloodied' richife cannot decide on a name for themselves, but they can all agree on what to call common richife: Cattle*

(*this is not an exact translation, but it conveys the same meaning)

Pawns: Most richife add a remote control module to their implant, allowing them to control two light 'Pawn'-class drones, a sturdy 'Bishop'-class drone, one heavy-armored,slow-moving 'Rook'-class drone, or one light, flying 'Knight'-class drone.

These drones are controlled constantly, and most richife put on an act that the drones are independent entities. There is also a theory that the drones end up getting accessed by the owner's subconscious, expressing other facets of said owner. Bits of this theory are plausible and would explain consistent idiosyncrasies in the act, like needing to 'kill' a drone to change the personality.

There are few who attempt to control one more, but the demand renders these "puppeteers" barely able to do anything independently, having difficulty thinking aside from the units, and can easily get into the habit of having the drones do everything in their stead, reaching such extremes that the drones carry the body to relocate it.

There are a few 'Queen'-class drones that are controlled by multiple individuals. Almost all are owned by the richife military, and ownership by anyone else is illegal, punishable by severe fines, incarceration, and handing the drone back to the military where it belongs.

And finally, there are a rare few that instead put the extra thought into controlling more complicated implants, but such a thing is considered weird, and kinda pointless, all despite The Mountebank being one.

• A rare few richifes choose to be expandable, however, hot-swapping is generally looked on as stupid, after an issue with Zipcassette brain implants, which could be ejected and swapped with another with a different skill-set. They were easy to eject, easy to tamper, and easy to sabotage. To this day, "ziphead" is a derogatory term, implying that the individual does not consider the full implication of their actions, nd instead chooses to go with whatever is high-tech, or something similarly insipid.

• Richife don't believe in 'luckyness'. Luck is just another word to go with 'chance' and 'probability', and things that do not significantly affect the matter are just probabilistic white noise. As such they usually detest games that rely purely on luck, and likely would only accept such games as they intend to rig them. Random elements in games are fine, however. There's only so much that can be within the scope of a game, and yet so much in life that does not care for what you determined the scope to be, after all.

• The main implant is sensitive to psychic alterations to it's owner's thoughts, forcing it to spend 36 minutes shutting down, and then restarting if there is no further alteration. While this is going on, the main implant will sound a distinct error signal. Unsurprisingly, psychics are not liked by the richife, and The Richife Government is willing to pay for information that could help in blocking them out.

There are richife that argue marsue are merely a fabrication to sell personal memory backup implants.

-Back to Species Menu-
< Quotillic
Ruhi >