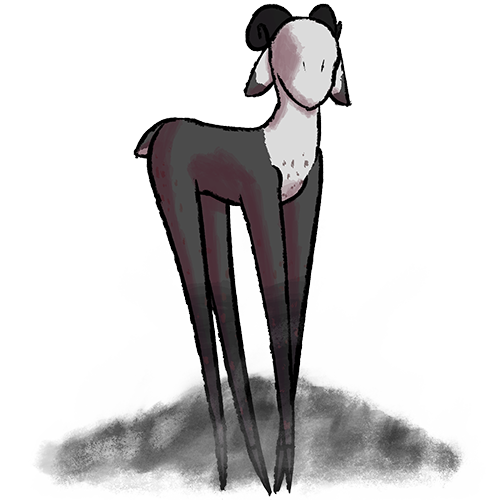 “I-I keep seeing it, man. I've moved planets and I still keep seeing it. Out of the corner of my eye, it's there, and then I look and it's gone. I think it wants me dead!” — Jerce who just made a new friend

Attack Method: Appear from behind, kick and ram in an attempt to knock out, and vanish.

Tallgoats are slender, caprine species with long legs that taper to pointed hooves, and horns that curl tightly backwards. Their heads hold a structure similar to other goatlike species, but lacks a face entirely. Their chests and heads are a pale white, with jet black horns, and the rest of their bodies are a dark grey color, with flecks of dark red. They are covered in a thin, silky smooth fur.

Most tallgoats are seen at a distance, through fog, behind trees, standing still, simply watching whoever sees them. The moment one looks away from the tallgoat, however, it is liable to have vanished upon looking back. These tallgoats tend to follow their spotters around until they leave the area, and sometimes even beyond that. Despite this, they rarely mean harm, and simply find people interesting. Many a visitor to Cth'Leoth has accidentally adopted a tallgoat pet, as it can be hard to be rid of one that finds any one person particularly notable.

Tallgoats seem to have powers based on observation. When being looked at, a tallgoat moves smoothly and slowly, but when unobserved they move nearly instantly, able to travel across large areas in a fraction of a second. This makes keeping track of them difficult, but if one manages to become friendly with one, they will attempt to remain around their new friend. Getting rid of a tallgoat is harder than keeping one around.

Despite their friendly nature, they are usually averse to physical affection. A tallgoat wishing to express affection towards another will simply want to make itself noticed, and stay closer to its friend than an unfamiliar tallgoat would. On rare occasions, a tallgoat will allow itself to be pet, if enough trust has been built up. Reports state that this is extremely rewarding.

Transport: It is not known how tallgoats move as quickly as they do when unseen, nor why they are seemingly unable to do so when watched. Often tracks can be found indicating they have indeed traveled the entire distance themselves, but many times they are able to move into places that would be seemingly impossible for them to reach. Recording the process has proved ineffective, as graphical glitches have manifested in close-up footage at the moment of movement.

• When a tallgoat can tell that it's dying, it will vanish and never reappear again. Some theorize that it heads somewhere private to die alone. Not many tallgoat corpses can be found around their natural habitats, leading some to believe that a tallgoat that knows it is going to die will simply vanish from existence entirely or toss itself into something that will utterly dispose of its body. This behavior has made it difficult to determine a natural lifespan, as it is difficult to find tallgoat corpses that have died natural deaths to autopsy.

• Similarly, nobody has seen them eat. If they are hungry, they will be unable to eat anything nearby unless nobody is looking, at which point the food will simply be gone the next time somebody looks. Experimentation has verified that the food does transport to their digestive system. A tallgoat can be starved simply by keeping constant watch of one for long enough.

• Some tallgoats seem to keep collections of similar objects scattered around where they live. Often pages of journals and notebooks from people documenting their visits. Taking from these collections is one of the few ways to cause a tallgoat to become aggressive.