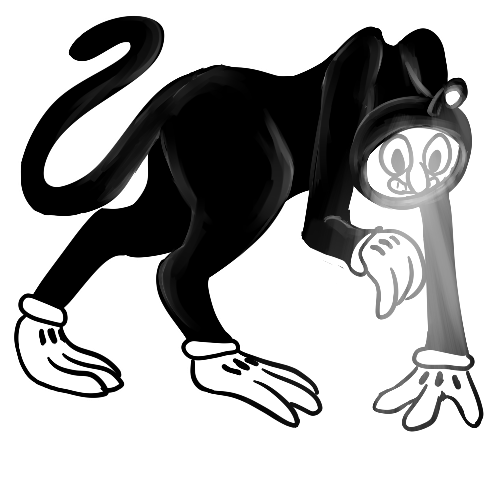 “A song in the night, a death at first light.” — Frescari saying

Attack Method: Blinds its prey with the light of its face, then pounces upon and dismembers it.

These nocturnal predators are known for their cries like distorted train horns, which ring eerily through the night. Beneath the skin of their faces lie bioluminescent bacteria which they use to blind their prey in the dark. As a result they have poor night vision.

They stalk through the night on long legs that end in feet resembling gloved hands with three long fingers apiece. From the end of their bodies extend a long tail. Their flat faces resemble torches, with an additional, smaller light on a bobble rather like an angler fish's extending from the top of their heads.

Bbizomi are pursuit and ambush predators. A bbizom will latch onto a target and stalk it tirelessly for days on end at a walking pace, appearing as nothing but a distant glow in the dark of night and the echo of a discordant horn. As their prey gradually tires, they will draw closer and closer each night until they can finally pounce and tear the poor creature limb from limb.

Their alternative strategy is hiding in a tree with their faces dimmed and waiting for prey to pass below in the night. When they hear something approach, they will leap down and blind the being with a sudden flash of their face, then rend it to pieces for easier eating.

Domestic Bbizom: This breed of bbizom has been domesticated for hundreds of years by the frescari. They were originally used as steeds of war, as bbizomi pursuit hunting made them terrifying opponents. Domestic bbizomi boast more variation in coat patterns including stripes and polkadots, and are intelligent enough to learn tricks such as shaking hands and rolling over.

Flashlight Face: Bbizomi can change the illumination of the bioluminescent bacteria in their face at will. They can use this to blind prey or light up the darkness.

• In frescari folklore wild bbizomi are thought of as omens of doom.

• Bbizomi are naturally carnivores, but enjoy worms as a special treat and other bugs to a lesser extent. Feed a bbizom enough worms and it may warm up to you if it doesn't kill you first.