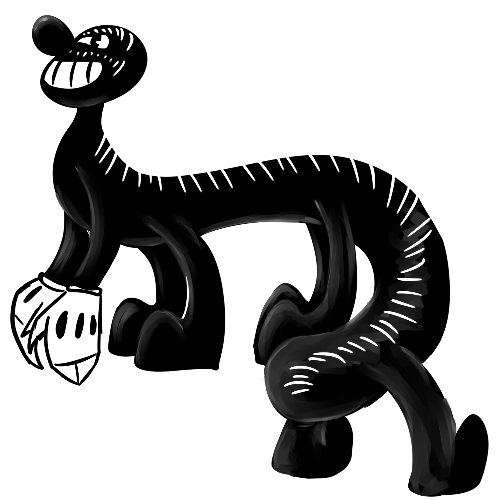 “Step 1 to dealing with a shrakka infestation: move houses.” — Didni Wurl Guide to Dealing With Pests

Attack Method: Rushes its prey, slicing with its digging claws and chomping with its jaws. Sometimes it pulls prey underground to suffocate it.

The frighteningly sapient-seeming face of the shrakka grins from behind a bulbous black nose, in the midst of thin white stripes that course down its back to the tip of its long body. Six legs with the classic bulbous Didni Wurl feet support its length and enable it to skitter quickly along. Tunnelers earn their non-frescari name due to their spade-like foreclaws, which enable them to dig rapidly through the earth. They are tailless, and thus unsteady when they rise up on their hind legs to peer around on the odd occasion they surface.

Typically their teeth are bared in a grin, though they will scowl when aggravated.

While naturally solitary, small packs of them band together to hunt off their homeworld. This only compounds the threat they pose to sapients. The behavior seems to be a result of habitat loss, as it has also been observed in expanding cities on Didni Wurl.

Tunnelers lay clutches of around three eggs and care fondly for their children until the babies mature. Parents will jealously guard their nests, as even packmates may eat the unborn eggs.

Burrowing: Shrakka can burrow rapidly to escape from threats or undermine prey.

• Attempts by the very rich to keep tunnellers as pets have been largely unsuccessful, as they tend to eat through any material or person that tries to contain them.

• Shrakka eggs are considered a delicacy on Didni Wurl. They taste very sweet.

• Many a traveler on Didni Wurl has lost their life due to falling through shrakka burrows dug too close to the surface.