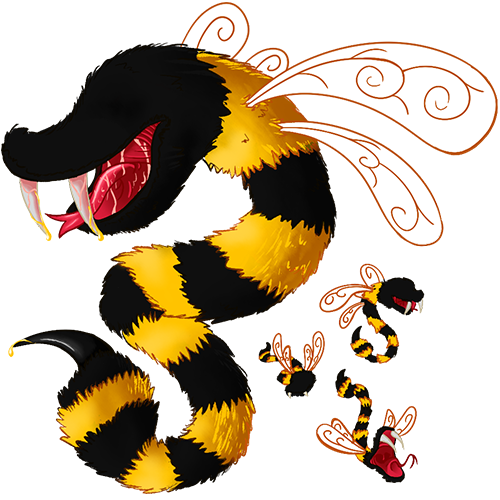 “Bees are good. So are snakes. So why not both?” — Vaeri about to create vees

Attack Method: Vees swarm the target, wrapping themselves around the victims limbs before biting/stinging them.

When normal citizens, common sense, or a basic idea of morality all ask why, the vaeri asks why not. Why shouldn't we make a race of flying snakes with a thirst for blood and a tendency to turn corpses into hives, then hide them on outgoing ships headed across the galaxy?

Vees resemble snakes with either one or two sets of wings. These snakes are have fur with yellow/black stripes, no eyes whatsoever, and very, very large fangs dripping with horribly toxic, albeit nutritious, venom. What the vee lacks in sight, it compensates with malevolence towards the living and an incredibly strong sense of smell. In the event they find something they can't strangle or bite to death, they also have a large stinger at the tip of of their tail.

Vee's are communal creatures by nature, living in hives containing anywhere from eighty to several thousand vee at a time. How large the colony is depends on the region, with areas with more wildlife containing larger colonies of vee. When a vee colony reaches full capacity, members the hive can no longer support will leave to either start a new colony or join a colony that can support the extra vee.

Vee hives are usually located closely beneath the ground, and are easily disturbed by unfortunate individuals passing through the area. This all to often leads to the hive being aggravated, swarming out of the ground in a storm of furious hissing and venom. In the event they cannot build beneath the ground, they will construct a nest out of fur, dried venom, and any other loose material available.

When leaving the nest vee travel in packs of various size, with each packs function directly related to the age of the vee composing them.

Scouting parties are the vee just one month old, and consist of anywhere from ten to one hundred individuals. These vee fly off in different directions to find areas the colony would find valuable. Afterwards, they return to the colony and report what they've learned, such as whether an area would be suitable for a new colony or happens to have an abundance of food this season.

The colony then sends out several scavenging parties of two to three vee for the purpose of retrieving small consumables, such as berries, fungus, or particularly large insects. After they've eaten enough, they return to the nest to regurgitate the excess food for their young. These vee are slightly older than the vee composing scouting parties, and are mostly differentiated by having the experience to know what vegetation/wildlife is edible and what isn't.

The next group of vee are the hunters, who having survived into their third month are old and large enough to hunt for bigger game. The hunters will travel out in several flocks of five to eight vee. Usually small animals or particularly large vegetables, but if fairly close to the nest they won't hesitate to try and bring down larger animals to bring back to the colony. Unlike scavengers, hunters don't regurgitate their food but instead drag the entire carcass back to the hive where it is promptly picked clean.

After their first year, the vee is now a soldier. Vee are at their strongest during this time, being the largest vee with the deadliest venom. However, soldier vee only leave the nest when the nest is in danger, there are not enough hunters to provide for the colony, or the colony is migrating. The rest of the time is spent in hibernation, occasionally waking to eat food or provide examples for the hatchlings.

Around one year and six months, the vee is now an elder. Elder vee are the weakest vee, having ineffective venom and are no longer capable of catching prey, much less constricting and injuring them. Instead, elder vee are responsible for most of the labor back at the colony. Labor such as maintaining the colony, laying/monitoring eggs, and being the first to alert soldier vee when the colony is under attack. They also have the task of training young vee in using their wings and other preparations for their future as a scout for the colony.

In the last month of their life, vee take on a new role: larder. Functionally speaking, the vee is in a near vegetative state during this. Their venom production is greatly increased, and their internals are reconfigured towards producing more venom. The purpose of this is to generate large quantities of venom which will crystallize and can then be stored for later consumption. Notably, vee in colonies being abandoned OR are separated from the colony won't actually change at this time, and will remain an elder vee for the remainder of their life.

Honeyvee: Honeyvee are a strain of vee with the toxins removed from their spit, and are significantly calmer towards non-vee individuals, particularly veekeepers. Their "venom" generally has either a sweet or tangy taste, with a slight numbing effect. Occasionally a vee will produce a different flavor of venom, which may be bred into a new strain of honeyvee.

Pitchvee: Even for vee's, the pitchvee is obscenely aggressive. These vee live solitary lives, only coming together to bear young before leaving once more. Their venom contains a powerful paralytic, a fact they use to their advantage. Pitchvee's fight by swooping past their target, quickly biting them to inject venom, and flying off to prepare to divebomb another victim. After all offending targets have been bitten, the pitchvee will stalk the individuals until the venom has run its course. According to several survivor reports, their venom tastes awful and is comparable to tar or smoke.

Sweet wine: Officially, the nutritional value and taste quality of vee venom has to do with the nutrition of the food they eat. Officially, the papers pointing out the venom tastes better with more nutrition than when the vees suffers more are labeled false. It is purely a coincidence that protesters complaining about the ethics of producing this venom have collectively taken a very long vacation during the same year the venom produces its best batch to date.

• When a vee nest is disturbed, the eldest vee in the colony will carry young vee who have yet to develop functioning wings onto the surface, so that they can watch the proceeds.

• Vee venom is highly nutritious and delicious, and if one happens to be part of a species immune to this venom they should consider incorporating it in their diet, or buy honeyvee venom.