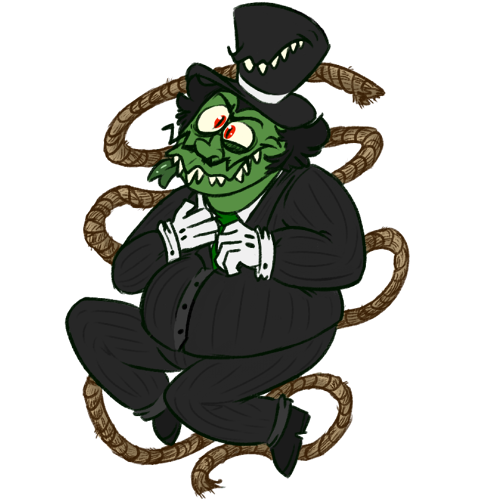 “Fiiine. I suppose my -super cool- virus will have to stay in its bottle.” — A drattle, after being told not to poison the water supply

Attack Method: Tie the attacker to a pair of train tracks and laugh maniacally.

[Show off] Neutral trait
This character boasts about their skills, and often want people to watch them do things to show off how good they are at it.
[Passionate about villany] Positive trait
The character has a strong passion for terrible dastardly evil. They might know more about wickedness than others, or may perform better on tasks relating to knavery than someone else with equivalent traits and skills.
[Pushover] Negative trait
This character finds it hard to refuse orders or requests from others, and is easily persuaded to perform tasks.

Drattles have their own version of the neo, who is a wacky comic book villain.

Drattles are plump dark green wrinkly creatures with yellow or red lizard eyes. All drattles have big twirly mustaches and look like they are wearing a top hat. These top hats are in fact part of the Drattles' head, hiding another mouth. Because of this, Drattles can sometimes be seen wearing a hat on their "hat". Both of the drattle's mouths have very sharp teeth in them. Drattles normally dress in formal clothing or in clothes that look stereotypical evil with plenty of spikes and very high collars.

Drattles spend their lives trying to cause unneccecairy misery and destruction only to stop whatever they're doing once someone asks them to. This leads some people to think that they are actually good deep down and are merely acting evil for fun or attention, but this is a common misconception. Drattles are fully behind every evil act they attempt to undertake, but they are so terrible at saying no that they'll easily drop the evil plans they are so excited for.

The drattles were first discovered by a passing exploration crew. The drattles had just sent their first ship into space, directly towards their sun. The crew opened up communications and inquired as to what the purpose of the ship was, and as it turned out the drattles had collectively decided that it was a good idea to blow up the star that made life on their planet possible. The captain of the exploration crew exasperatedly started to contact the authorities to have the weapon disabled and to have this apparent death cult of a species wiped off the face of the universe. But before the drattles' fate was completely sealed, the captain made an off handed comment telling the drattles not to blow up their sun, and surprisingly the drattles just whined a bit and stopped their weapon in its tracks.

The drattles were still in hot water even with their odd, reluctant compliance. Few people wanted a species around that had to be babysat not to cause incredible mayhem. While the intergalactic community was still debating weather or not to get rid of them, the drattles were picked up by shady organizations that discovered that the drattles were very creative at designing diseases and weapons of mass destruction. As such through their bribes and blackmail, the drattles have stayed alive for centuries.

Gentle drattle: Occasionally a drattle will try to make a good clone of themselves. The result is invariably a gentle drattle. Gentle drattles come in soft pastel colors and have white, bushy mustaches. They are kind, caring and charming.

They are not what they seem.

Gentle drattles look like they are trying to build a better world, but this is all done in an attempt to socially engineer themselves into a position of power that allows them to cause destruction on an enormous scale. Gentle drattles might set their sights on destroying entire planets or spreading especially potent strains of the clockwork virus. Once they are in this position, they don't stop their evil deeds no matter how much anyone begs them.

Intergalactic law dictates that gentle drattles are to be shot on sight, but those who don't know what they are will often come to the defense of the "kindest person they know."

Rope em up: Drattles are amazing at tying things together. Usually this involves tying a hostage to train tracks or some other death trap, but drattles can very quickly tie any two objects together if they want.

• Few drattles are born naturally. Drattles usually reproduce by making evil clones of themselves, but since drattles already are evil the clones are just the same drattle but with a goatie. The clones don't like how these goaties look on them and will shave them off once they're able to.

• Despite their inclination towards crime, drattles actually make for good police officers due to how fast they can restrain criminals with rope. These drattles have to have a partner around at all times lest they join the criminals they're supposed to catch.

• Drattles don't respond very well to visual cues. This leaves species that can't talk like the frescari unable to make a drattle get them out of a deadly situation the drattle has put them in. These species understandably feel uneasy about the fact that the drattles are just allowed to walk free.

• Drattles' mouths suggest that they were originally strictly carnivores but have modified their own digestive system to handle plant matter at some point. Knowing the drattles, they probably killed off all the animals on their planet on purpose. 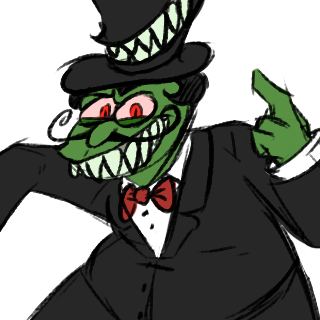 -Back to Species Menu-
< Drakon
Dretherne >