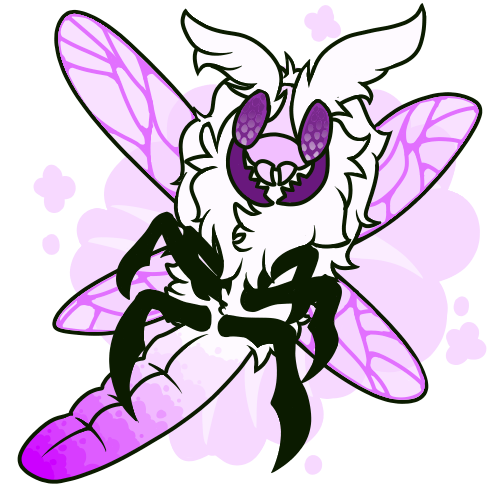 “There are no bylaws saying I can't bring a motx on your ship!” — Chris Pagepoh

Attack Method: Attempts to overwhelm its target with the swarm's numbers and crush target with heavy blows from its legs. After the target is deemed "vulnerable" the swarm violently tears at their prey's flesh.

The motx is a giant winged insect covered in gorgeous white hair. Each has six legs with the last two being the most powerful for crushing and disabling prey. Its large jaw has many serrated teeth used for tearing into prey and consuming it. Motxs generally travel in swarms and sleep in a flower like formation around their nests to protect their young thus adding to their elegance.

Motxs prefer to live in areas of darkness to lower the chance of their nests being detected by predators and therefore are aggressive towards light sources. They will attempt to attack said light sources if possible.

If a motx is hatched and raised in the light, it ends up being less aggressive to light sources, though will still investigate some light sources in dark areas, such as a streetlamp on at night. Motxs tend to stick with whatever species it grew up with when it is not raised with its own kind, and may become agitated and lost if they are unable to find one of these parental species. This makes them viable house pets if one is ever able to obtain and raise one correctly. Knowing the rarity of motxs, how dangerous and difficult it is to get a motx egg, and how in demand they are for their fluffiness makes them very expensive. Usually, only brave hunters and high royalty are able to obtain one of these as a pet.

• Riding a motx is not encouraged as pulling it off is extremely difficult.

• Motx fur is sought after for its fluffiness and can be sold at high prices.