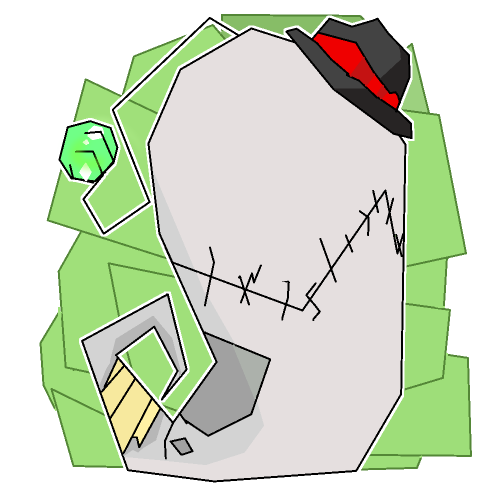 [Reflexive] Neutral trait
Characters with this trait will sometimes perform things on reflex without conscious thought. Depending on the character it can range from things like covering their head when they see a bird to hitting someone who comes up from behind.
[Direct] Positive trait
This character is to the point with most things they say. Other characters appreciate this and do not lose sanity when speaking to this character no matter what is being spoken about, unless the other character has a trait that causes them to panic. Conversations with this character tend to be short.
[Big Eater] Negative trait
This character will eat twice as much rations when it's meal time. They will also starve twice as fast due to the amount of energy they need.

Ashlaiz are highly known for their worship of death and what many would find to be negative items.

The ashlaiz are no-faced, ghostly white creatures with seemingly no arms. They can grow boneless limbs from any point on their body, though they generally fall off soon after. They have stretchable rods on their heads which transfers electricity. They use this to communicate, pick things up, and use machinery. The ashlaiz can pull information from others' heads and transfer information into them with this ability.

Ashlaiz tend to be very silent and invisible unless they have good reason to do otherwise. They are extremely good with teamwork and rarely turn on anybody. They are almost invariably extremely intelligent and unbelievably good learners.

The ashlaiz once dominated their planet with their immense intelligence. They rarely got any real building done until invaders came in. Most people who entered their planet got their ships and bases stolen under-the-radar. The ashlaiz almost immediately figured out how to work these spaceships and bases. Now, the species has spread themselves all across the cosmos, and are things to fear, though a small few become engineers on-ship.

Mind Reading: Due to the ashlaiz not being able to speak on its own, it must use mind-reading to speak to others. They are able to let people know what they want to say and also tell what people's innermost thoughts are. Ashlaiz don't tend to share others' thoughts and for the most part any secrets told to them are generally safe with them.

• Some species are not affected by ashlaiz mind reading and it has become a joke in the universe to just pretend to understand what ashlaiz are attempting to say.

• One can tell when an ashlaiz is reading people's minds because the light at the top of their heads starts to blink lightly.