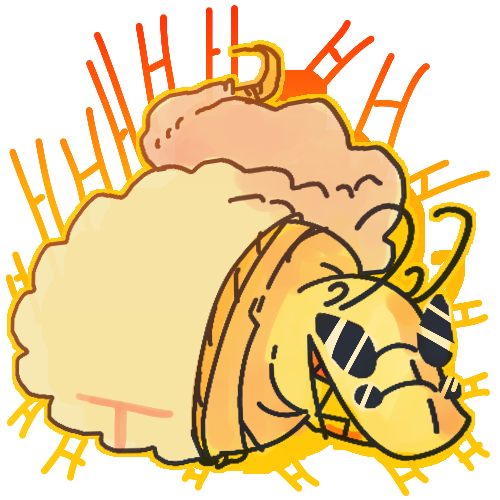 “The H stands for both Heartless and Hegemony. Take your pick.” — Harold Monster

H. Monster is a mettaet, more specifically a tsuchinoko. Bearing a yellow coloration, sharp triangular teeth he's always showing off in grins, and 4 curled antennas, H-mon is a proud snake who believes himself to be intimidating at first glance. Were he decently big and not the size of an overstuffed worm we'd be inclined to agree.

H. Monster is most commonly seen wearing a fur trimmed armless sweater that features the logo of his own company and two different pairs of sunglasses for all 4 of his eyes that hang unto him thanks to little cords. He tends to swap outfits every other week for the sake of not ruining his taste.

Although Chordata Inc. desperately tries to market H. Monster as a genius of marketing and fashion truth is H. Monster is really just a happy-go-lucky and eccentric smoothbrain who adores the word "Money" and everything that comes with it.

He's generally optimistic, cheeky, and surprisingly skilled at words despite his low iq even if he seems to only display this in excuses.

Despite acting cocky and brazen to anyone willing to listen H. Monster is actually a verified coward who would very much rather not get into any trouble, frequently making convincing but rushed excuses and running (slithering) away whenever any situation turns bad. In fact although he commonly jokes about messing with others he isn't nearly brave enough to actually follow through with it. Whenever he is unable to escape a bad situation H-Mon will put on a brave front and act even more brazen in the hopes that his fake confidence will deter anyone from going any further.

Oddly enough H. Monster can't help but grin in stressful situations even when scared out of his mind. This tends to help him whenever he pulls up his confident facade.

H. Monster is the face, founder and soul of the universe-wide fashion&resources megacorp Chordata Inc.

Chordata started off a small family business of sock vendors that eventually begun a freak period of growth thanks to the very first instance of a "Monster Tendency". Thankfully the aptly nicknamed "Monster Mom" was there to handle the complex and rapid growth of the company which she then promptly took over. Under her insightful guidance and watchful eye Chordata rapidly became a goliath in the fashion scene.

Following this takeover H-Mon became more a cog in Mom's economic machinations rather than an actually competent leader of the group. Although still technically the owner H-Mon was thrown out into the wide place that is space so that he could tour clothing shops and makers all over the universes in the hopes of either triggering a Monster Tendency to take advantage of or finding useful fashion brands to absorb.

Later on in the company's lifetime Mom decided to also invest in raw resource gathering across the universe which gave the company a reason to start space exploration and colonization. It is theorized that there are a decent amount of planets hidden from the public eye by Chordata for the sole purpose of gigantic mining operations and cheap labor.

Most tend to willfully ignore the possibility that their brand new underpants were made by an unknown enslaved silk producing species thanks to the simple fact that Chordata products are generally rated #1 in the industry.

Monster Tendencies: Despite being unable to coherently explain what makes fashion good or not anything that catches H. Monster's eye will usually become the next big trend in the universe wide clothing apparatus. Whether this is his talent as a tailor or his innate great luck at work remains to be seen.

Investors have nicknamed these events as "Monster Tendencies" thanks in part to their sudden and tremendous nature.

• H. Monster despises his mother not for using him like a tool for her company but for her naming sense, not the Monster part though, he thinks that one's great.

• H. Monster is called the "Soul" of Chordata Inc rather than the "Brains" for reasons he is too stupid to understand.

• Sometimes H. Monster accidentally turns a competitor's product into the next hit much to his dismay. His excuses to his mother at such occasions include "but it looked so friggin' coolll...", "I honestly thought it was one of ours haha", and "Yo, you gotta admit that its atleast got some cozy ass craftsmanship behind it Mom. R-right?"

His skill with words seems to disintegrate whenever Mom's involved.

-Back to Legendary Menu-
< Hero
HootoffDPresses >