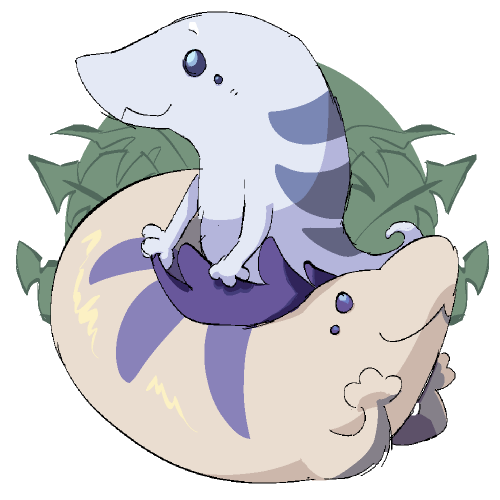 “Always remember to check your lalo fruit, you never know when one of these suckers sneak in a box” — A common warning on fruit shipments

Attack Method: Secrete stored toxins while in the mouth of a predator.

Chamilo are a species of tailed arboreal reptiles that resemble the popular lalo fruit. They have long white bodies decorated with three stripes and two arms they use to cling to branches and food. Due to their four underdeveloped eyes they often hang upside down to mimic fruit and avoid predators. There is very little sexual dimphorism among with species with both sporting large "horns." Though it is worth noting the females tend to be larger on average.

Chamilo are docile and easily startled creatures. Often opting to hide in the trees of the poisonous lalo tree where they can hide among their fruit by hanging from their tails. While anxious, they are easily to tame as they're unwilling to defend themselves unless absolutely forced. They can only store so many toxins at any time meaning they have to be absolutely certain before they utilize their defense mechanism. After taming they make relatively low maintenance pets thanks to their simple requirements.

Invasive: Chamilo that manage to smuggle their way into shipments of fruit will often adapt to their new surroundings upon reaching a new planet and breeding. Taking on the appearance of the closest native fruit and mutating to develop their own toxins. These variants can often vary in size, sometimes reaching as large as 10 feet. Chamilo this large will often crawl along the ground hiding among piles of fruit once it becomes impossible to hide properly among the trees.

Crested: Chamilo bred to be kept as pets often sport large sails on their backs as well as complex and color patterns. These chamilo often do poorly when released into the wild and struggle with health issues due to questionable breeding practices. Like invasive variants they can vary in size and sometimes get as large as five feet.

Chemilo: Chemilo are a subspecies bred for the purpose of being used as capture creatures by H-Class notails. Chemilo resemble the the fanned variant of chamilo; sporting a large sail on their back that changes color in correspondence to the levels of toxicity currently stored in their body. They are often used by those accompanying E-classes in order to safely test new flora without a lab, and unlike other variants this subspecies can spit their stored toxins in concentrated amounts. Something that's considered an improvement as it's not directed but proactive.

Sticky Skin: While usually used as a last resort chamilo are capable of secreting a toxic substance in order to defend themselves. This substance is made using chemicals pulled from the plants they consume and storing them in a special organ where they are converted into a wax like substance. The effects of this wax varies depending on diet and concentration but in some instances it has been powerful enough to burn skin.

• It's popular among some circles to raise chamilo on a diet of recreational drugs in order to use their defense mechanism for the sake of getting inebriated.

• There are many planets that regulate the trade of fresh lalo fruit in order to avoid invasive chamilo from spreading through their ecosystems. With seeds often being what's imported instead as they're the primary byproduct many are after.

• The noise they make when relaxed has often been compared to someone rhythmically beating a rubber chicken. Owners of crested chamilo find this an offensive comparison despite being the ones to say it most often