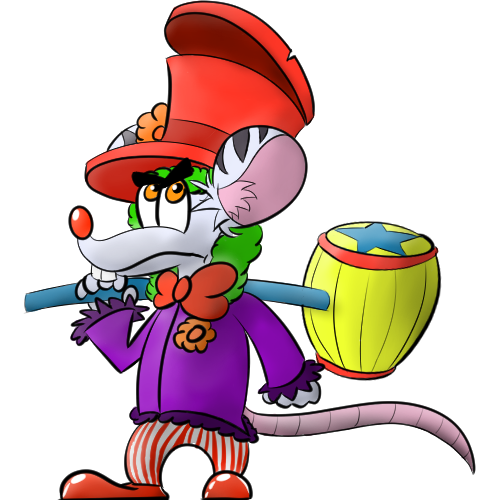 “Do not invite these THINGS to your child's birthday party!” — Unfortunate parent

Attack Method: Usually by swarming, and then a barrage of deafening honks to stun the enemy. Comically large hammers will be used if available.

They don't believe in any particular god, but if one is viewed as loud and/or colourful they're more likely to worship them.

Honklits are all in all, overgrown rodents with a love of jaunty and colourful clothing. Almost all honklits have large satellite-like ears to help them detect any loud sounds, and are covered in a thick layer of grimy white fur, one of the only characteristics that makes them similar to each other compared to the highly varied way they dress themselves. Honklits cannot stand wearing less than two colours, for the more they stand out, the more attention they get, and that's exactly what they want.

Any honklit worth their honk will have some sort of colourful attire, whether they're clownish rags or beautiful diamond encrusted jester wraps. A good way to find the leader of a gang of honklits that dress similarly is to look for the most blinding eye sore in the group, for the more attention catching a honklit is, the higher their social standing, thus they are more likely to gain the respect of their fellow honklits.

A honklit's face is in fact, not painted on. All honklits are born with unique markings that signify their subtype and standing in a honklit society. These can range from circles, hearts, crosses, geometrical shapes, and many others. Some aren't even symmetrical, like honklits with faces that have differently coloured sides. A honklit's face will be the only part of their body that has the possibility of being pigmented. The rest of the body is almost always completely white, with no special markings whatsoever.

Honklits crave attention. Without it, they crack.

They are loud, hyper, and are always looking for an audience, positive or negative. It doesn't matter to them, for attention is attention, and that's what they want. Due to this, they are rarely serious and opt to hop around and laugh uncontrollably at minor things instead of looking at a situation in a serious light, no matter how deadly. Their lack of sense of preservation does not help the situation at all, which means many perish in ways that could easily be avoided with common sense.

They are crass, rude, and honk at inappropriate times, and will always pick making people afraid over making people laugh, which makes the honklit the worst thing to invite to a child's birthday party.

Honklits like to spook people by jumping out at them from dark alleyways or garbage cans, or horrifying a crowd of people if they're lucky enough to get an audience via any gruesome act they can think about on the spot. The more people they scare, the longer they can go without food, so if a honklit was able to scare one person for the day thats pretty much enough for a 3rd of the day, or the equivalent of a breakfast/lunch/dinner.

Usually, honklits just go for food as a first resort, because feeding only off of fear can make them quite unstable. Honklits only feed off of fear when there are no food resources around, or if they're just looking for a change from their normal diet.

The only semi-positive trait that they seem to have is the fact that they can be quite impressionable to those that catch their interest, often their group or gang leaders. They attempt to dress similarly, act similarly, and very rarely even speak similarly. So often, many would catch a small group of honklits following around a singular being, star struck by every movement or word their leader makes or says.

Honklits have been infesting the shady parts and slums of most cities and towns for many, many centuries, with most of the local population still uninformed on how they got here in the first place. It was said that a ship once landed on a seemingly deserted planet void of visible life to scout for supplies. When they found nothing, they went back into the ship, and took off, unaware of any differences in the atmosphere, or the way the ship was quietly honking.

Only when they landed once more on their destined planet, did the difference make itself visible. They streamed out, assaulted the crew members with comically large weapons until they were lying on the ground in terror, and then left with a honk in the direction of the closest city, all in the span of 5 minutes, marking the first city to have a honklit infestation.

Of course they spread, repeating the cycle of "Sneak into the ship of unwary crew, wait for them to land on another planet, surprise assault with large object and honking, and then running off to the closest location with a civilisation." For multiple years they were absolutely everywhere, causing chaos and destruction wherever they laid their filthy paws on, until they didn't.

For unclear reasons, many disappeared, and the rest went deeper into the cities, right into the slums. This was a celebrated occasion, for the cities and towns' inhabitants are finally mostly free of the honklit plague. As long as they don't wander too far into the questionable parts, they are free of the terror rodents.

Honkdims: Ranging from a light beige to the darkests of browns, they come in many shades but white. Timid yet respectful, they dress smartly and speak civilly, the exact mirror opposites of honklits. Honklits consider them the lowest standing in their society, for they have no face markings nor do they wear bright articles of clothing. They will very rarely use honking as a method of communication.

Trombits: They look and act the exact same way a normal honklit would. The only thing that can be considered different about them is the fact that instead of making normal high pitched honks native to the honklits, they emit an eardrum-bursting low trombone noise that can be heard for miles. Their honk is so powerful that even honklits appear shaken when one replies to their banter.

• If one start seeing honklits when walking around the streets of a city or town, turn back. That's where the slum starts.

• A few believe honklits are related to zannis in some way. While they do mostly share gaudy colours, zannis try to brighten a person's mood, while honklits will throw that person's grandmother outside a window. Honklits and zannis being related is impossible though as they do not come from the same planet.

-Back to Species Menu-
< Homuncustien
Human >