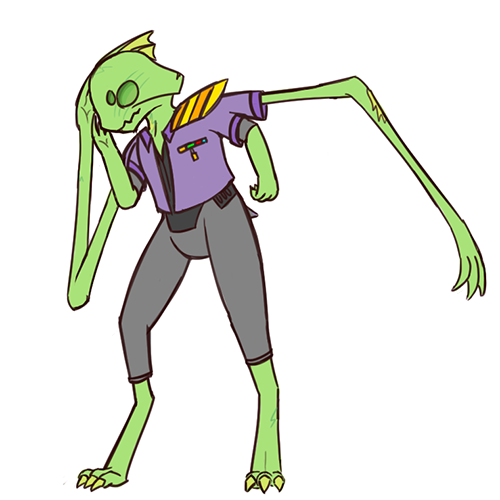 “I ask you, why do we have three secret police forces? What failure of a nation needs three clandestine groups to spy on itself and stir up trouble?” — Gaius Atria

Job: Supreme Commander of the metima Unified Legionary Guard
Likes: None
Dislikes: Disorder, The Legacy, The Hierarchy
Notable contributions: Important position as a de-facto species leader, largely held up to be the pillar of stability propping up metima society.

Supreme Commander Gaius Atria is slightly short for a metima, with an otherwise unmarked head covered in faded scars and dents from long years of military service and fighting assassins. Her eyes are missing entirely, leaving only smooth concave hollows where they once were. Atria's scales tend towards the yellower end of the metima spectrum, which places her "natural" class as fairly low, but she always displays herself proudly, body well-muscled from years of training despite her age. She dresses either in the official uniform of the Unified Guard or in simple but extremely high-quality garments, as a middle-claw to the society she is holding together.

Gaius is tired and reserved. Her duties have occupied much of her time for the greater part of her life, and it is beginning to wear on her. While she attempts to be friendly, it is common for mean-hearted and waspish comments about even her closest friends to slip into her speech, with little chance of an apology. While the Supreme Commander tries to be nice and idealistic as she once was, she does not always succeed. This acerbicity conflicts with some of her long-held beliefs, as Atria is a believer in the strength of working together, and that even insurmountable odds can be beaten if everyone would stop fucking each other over. She has little time for those engaged in what she feels to be "unnecessary" conflict, no matter how justified others might say that conflict is.

She has a special place in her heart reserved for hating both the Legates and, though technically heresy, the Council of Elder Hierarchs, as they have completely refused to change their ways or their infighting, despite the many problems it is causing, and despite a new set of Legates and Elders, there is basically no difference between the current time and when her parents were slain. If she could in one swoop topple them both without dragging her people into a self-destructive civil war she would do it without hesitation.

Supreme Commander Atria grew up during a time of serious conflict. The Legacy and Hierarchy's endless disputes had escalated to a shadow war, with secret police raiding members of both sides. In the center of this, her parents, both low-class members of the Unified Guard, were killed while serving as bodyguards for officials, leaving her orphaned at a young age. Too young still to immediately enlist, she was just within the criteria to be taken in by the military orphanage where she would spend the rest of her childhood. The conditions in the orphanage were spartan to say the least, due to shortages of basic supplies rampant across metima society at that time.

Gaius quickly gathered a group of other orphans, forming her own group, a tight-knit band of brethren who would eventually all but rule the orphanage from the inside. In her seventeenth year, the rations were cut again, and she decided that enough was enough. Her, for lack of a better word, gang, seized control of the orphanage and demanded proper food for all the orphans. They held the building against the police for nearly a week, and this action caught the eye of a military recruiter. She was offered a position as an officer cadet, and upon fully joining the guard, was an immediate sensation.

The Guard was in turmoil at the time, and this young recruit soon spotted an opportunity and began leveraging her way up. As a centurion, she was noted for her strict discipline and constant driving of her soldiers to be strong and enduring, to the point of substituting uniform checks and personal time with drills and long marches. By the time she reached the rank of prefect, her refusal to engage in extra-Guard politics was a subject of interest. And by the time she became commander, there was quiet outrage at her unorthodox practices, her young age, and the way she simply ignored the established social standards of high-ranking officers to spend more time on personal grooming than training.

Atria was likely to stay at her rank indefinitely, when the ship containing most of the senior command staff crashed coming back from a social event, killing them all. With few other options surviving, she was soon Supreme Commander of the metima Unified Legionary Guard, at the startlingly young age of just thirty. The universe was however seemingly not willing to let her rest on her laurels.

A few months later, a paper arrived on her desk from the Elder Council of Hierarchs, demanding the arrest of the Legates for corruption. The next piece of paper in the pile was an order from Rena Octavius, Legate of Iron, demanding the immediate arrest of the council of Hierarchs for corruption, heresy, treason, and incompetence. In a first for the Guard, she decided that actually playing sides was stupid and a waste of everyone's time and simply announced the independence of the authority of the Guard, overruling the objection of both governments.

Since then she has established the Guard, previously no more than a tool in the power plays between the authorities, into its own organisation, helping maintain peace and order despite the ongoing crises of the metima. As the food crises worsen and the tensions between Legacy and Hierarchy ramp up again, it is widely thought that the stability of the entire civilisation may rest on the shoulders, or at least on the achievements, of this ageing leader.

Supreme Commander: Atrius is always able to call in reinforcements to her location from her personal bodyguard, who tend to follow at a discrete distance.

Additionally, any members of the Unified Legionary Guard will defer to and take orders from her, and even non-homeworld metima are likely to give a great deal of respect.

• Atria's lack of eyes is commonly assumed to be for the usual religious reasons, enabling her to leave the planet. However it is actually due to a failed assassination attempt damaging them so badly they had to be removed.