Not actually an owl 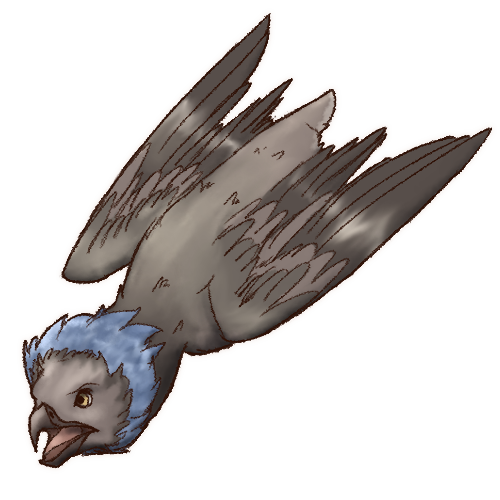 “Not only can they smell any food you have, but I think they can also smell fear.” — Madero Scadero

Danger Level: Low
Likes: Ceremonial preening, Invading your personal space
Dislikes: Being rightfully punched in the nose or kicked off a lawn

Attack Method: Will hiss and honk loudly and in all caps at you if you are in their personal nesting territory and charge at you. Will chase after intruder if intruder runs and may even nip at one's legs/bum, but will turn tail if one stands their ground or shows any sort of initiative.

Kirkland's Water Owl is a large waterfowl with a wingspan of 6 feet and a bluish mane. These manes help them cover up precocious water owls to hide from competing water owls who may wish to steal their offspring, and also to keep young water owls warm and protected from strong island gusts. These manes also play prominently in post-nesting bathing ceremonies (sometimes called "Bath Parties"). Kirkland's Water Owl is not actually classified as an owl; instead it is a 'bear-goose'.

These birdlike entities nest in huge colonies in their endemic range and are capable of diving up to 10 feet underwater for fish. The water owl gets its name from explorer Welberr Kirkland, who saw the nocturnal creature with mane fluffed from afar and assumed it was some type of giant owl. Does not hoot. It makes a sound like a bear's growling or a hungry stomach's growling when annoyed (which is its normal disposition), and a mixture of hisses, honks, and roars when angry. Prefers to hunt and scavenge at night; may pry an opening in any insecure of a ship or building in order to gain access to food stores, which they may ransack and horde for themselves individually. If other water owls see where an individual water owl got food from, they may swarm on an insecure spot and deplete a whole section of an unlucky crew's or town's food supply.

Thankfully, individual Kirkland's Water Owls are not capable of cooperating with each other and prefer to bite at each other to get priority of the best food when swarming instead of forming a unified death horde.

Scavenger: Can easily find caches of food and find a way to gain access to it.

• Nowhere on any landmass that they occur on is safe from water owls. Nighttime scavenging from adventitious individuals or full swarm invasions have been reported in places thought to be at least 50 miles from a colony. Kirkland's Water Owls can also reach you in your nightmares. Due to their sounds being so similar from afar to normal nighttime sounds, many who have lived in a place where they occur and have experienced a swarm episode report trouble sleeping due to nightmares related to the experience, or due to a need to constantly check and make sure that the noises they hear are not indicative of water fowls getting all up into their good eats.

• Though water owls try to be intimidating, they are actually incredibly cowardly when faced with anyone who shows any sort of initiative. If you kick one off your lawn it'll not only run away but also have its feelings hurt and probably won't bother you anymore.