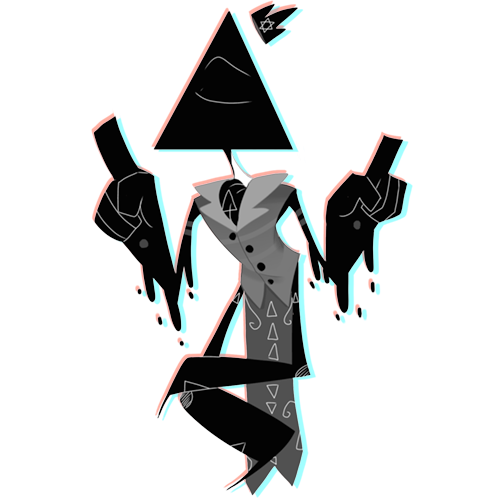 “You're not my real mom.” — Azathoth to a common table lamp

When meeting Azathoth for the first time, many people will instantly notice that they felt like they've seen Azathoth before, but have no idea where they met them. If while reading this entry you feel you have met Azathoth before, stop, and inform yourself that you have never met Azathoth, and likely never will.

Azathoth looks quite like a tegyp but their hands are connected to their arms, and they have a neck that appears to connect their head to their body. Azathoth head is a single, nearly paper thin triangle, with a single eye displayed on it. This eye, when it opens, appears to have three pupils, with the middle one longer than the other two. Azathoth body is pitch black, except for two bands of grey on their arms, and a white stripe on the neck. When in movement Azathoth may drip some of their body on to the ground as if it were slime. The drops of their body will eventually lift itself from the ground and either return to Azathoth, or disappear if not bottled up. The body of Azathoth has been confirmed to be made totally of blood.

Just below Azathoth's neck is a triangle on his body. This triangle is normally yellow when in a neutral mood, but may change colors when they are in certain moods, such as red when they are deeply angered, or white when totally relaxed.

Though none of the information above is the real Azathoth. Above this body's head, is a small crown with a single eye. This is the main form of Azathoth. When this crown is removed from the body, the body of Azathoth will turn into a puddle of pitch black blood. If the crown is returned to this puddle within a few hours, the body will reform without ill effect. If not returned the body will permanently die.

When Azathoth is left without a body, Azathoth will reveal their truest of forms. A deep black living room lamp. Anyone who sees the lamp will remark that they feel like they've seen the lamp before, making locating Azathoth when they are a lamp much easier.

Azathoth is commonly regarded as stuck up and snooty. Azathoth tends to stick away from people as they are easily agitated by people they find to be lacking in intelligence. Azathoth only finds comfort in hanging around tegyps, which they declare as their children. Azathoth constantly declares that they are the first tegyp, and that they created the first "final versions" of tegyps due to the order of their mother.

This story was considered highly unbelievable but Azathoth, after crafting a statue will toss it away in a room, after a which it will disappear suddenly and in a few days a tegyp with the same exact statue as a head will be found roaming about. Azathoth states that they are a demigod, and their parent, a god. When asked to see their mother who gives them orders on heads to make, Azathoth will show the person a normal table lamp of no unusual proprieties.

Everyone who meets Azathoth feels a sudden and extreme feeling of deja vu, this effect can spread into nearly any media, including pictures, text, videos, and even spoken word. Azathoth is constantly annoyed by people informing them that they feel this situation has happened before because Azathoth themselves has never felt deja vu and cannot related to the idea.

A very proud and spoiled person, Azathoth can be difficult to work with if anything they do is criticized in the least. Noting just one issue with a sculpture they're working on can send them spiraling into a bit of agitation. Azathoth showing active aggression is extremely rare, and for the most part Azathoth is a pacifist. After becoming agitated Azathoth will normally sink into the nearest chair and watch tv for days on end, losing motivation to work. If Azathoth is extremely agitated they will toss away their crown, and become a lamp, refusing to stop being a lamp for weeks at a time.

While Azathoth can come off as rude they do care deeply for tegyps and may break their pacifist code to help a tegyp in need. Azathoth is also willing to teach those who come to them skills that will assist them in life.

Very little is known or understood about Azathoth's history, and it's believed that much of it is lies as Azathoth is a known liar, finding it funny to make up history about their past.

Azathoth was born to a god, and has another sibling from this union called Avithon. Suddenly one day Azathoth's parent got a divorce, with themselves. The god, now split into two split everything they owned, as common in a divorce, and Azathoth went with one of them to live on Mendac-Ium. Azathoth has no idea what happened to his other parent and their sibling, but notes that they frankly don't care about where their sibling went as they dislike anything that takes attention away from them and that Avithon did just that constantly. They do note that they share a heavy dislike for divorces, stating that the divorce was fairly traumatic. Azathoth makes it clear that they don't think anyone should enter a union with another person unless they're sure of it.

When Azathoth and their mother arrived on what is now Mendac-Ium, Azathoth's mother ordered them to get to work on creating life out of rock. Azathoth was a poor sculptor and the life Azathoth created looked hideous. Over time Azathoth has improved their sculpting skills, but Azathoth notes that sculpting is not a passion, and in fact they hate it. Azathoth is only making sculptures so their mother would not be disappointed, or nag at him too much for not having any goals in life.

If this is all to believe, Azathoth is at least partly to blame for the anomalies on Mendac-Ium. To prevent Azathoth from possibly spreading anomalies outside of Mendac-lum, Azathoth is tracked at all times and any reports of Azathoth making any sudden movements or trying to escape the planet are acted on quickly. Thankfully for everyone involved Azathoth is not interested in leaving their house, even though they note that their mother has been trying to get them to move out for ages.

Chaos: Azathoth is surrounded by sudden chaotic events, and it is not recommended to stay around Azathoth for this reason. Azathoth is not a fan of random funny chaos, such as a prank that makes no sense, Azathoth only takes pleasure in social chaos and horrible events that cause complete anarchy or turning a system on its head. Petty chaos will not do for Azathoth.

• If left in a pitch black room for more than a minute, Azathoth changes from black to white, but changes back once put in even the slightest amount of light for a few seconds. The fact that this happens is not as baffling as the fact that someone managed to figure this event out.

• Azathoth has a shrine to a person named Walton. No one knows who Walton is. 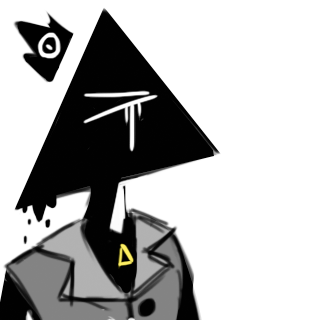 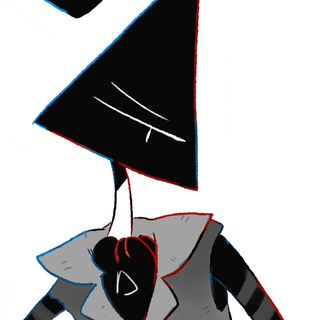