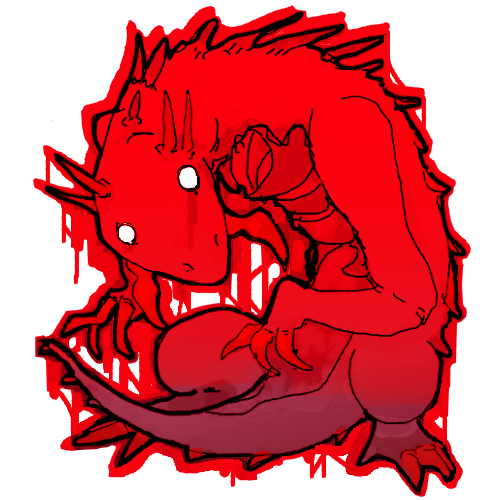 “To some people, Animal is the Neo. Those who live out in the forests, with no education to their name, speak the most fluently in its language. Not even the smartest scientists could ever hope to have the knowledge that they do about this being, this Animal.” — Forest guidebook

Summary: An ever seeing beast of the woods. Thought to be a demigod of the Neo, and holding power over metamorphosis due to its ever-changing ways. It shows fondness over those deemed less intelligent by others and lures them into its horrid ways.

Animal is ever-changing, as such its presence is not easily described. The most well-known of Animal's appearances, one which has been spotted again and again throughout time is one of a long lizard, around 10 feet tall and with its stomach removed. Its ribs come out, or even float outside of its body, taking up space where the belly once stood. Its spines are long and thin, with those too detaching and taking flight when they so, please.

The most remarkable trait of Animal and one talked about in all legends involving it are the long mandibles at the corners of its mouth. Animal seems to be proud of this trait, as all of its transformations are bestowed with this asset.

From far away Animal may be confused for a starving creature due to its bones rubbing up against its skin, and in a way, this is true.

Animal may be assumed to be a demigod of the Neo, but it does not always the outright destructive attitude foretold in stories of the great and terrible god. Instead Animal is quiet, judgemental, and very hungry. It walks at a slow pace, holding still like a statue, but when it smells prey, it moves at speeds nearly unheard of, somehow weaving in and out of thick trees with ease even at its size. Escape is a myth for those on foot, and a challenge for those in vehicles.

Animal, as the few who can speak to it explains, has a vendetta against intelligence, or to be more correct, has hate against those who believe themselves to be smart. To those people, Animal is a feral and violent monster who they are unlikely to survive. To those who think themselves to be idiots, Animal is a refined creature who pleasant and inviting to others. Even those who gain approval with Animal are not wholly safe. Should they show more signs of intelligent thinking, correcting Animal and it's followers on its ideas or begins to smartly improve upon their environment too much, Animal will deem them a threat.

Places where Animal has been spotted, have seen cults in the woods made to the creature though it may be hard to pick up on it being Animal at first. After all, like many creations of the Neo, Animal transforms to be the "fittest" of its terrain. Animal has even been spotted as harboring a cult in a seafaring town among some sailors as a water beast. Forest may be its favored habitat but any supposed demigod of the Neo is a sham if it cannot find a way to survive in any location.

Due to the two distinct attitudes of Animal, and the few who have met it directly, it's history, acts, and tales are a better way to understand this cruel beast.

What is believed to be Animal has been seen in many cultural texts about a monster who lures the innocent and clueless into the woods to consume them, wearing their skin afterward. What actually happens isn't far from those tales but is frequently misunderstood. Animal does, in fact, lure these people into the woods, going out of its way to violently kill the intelligent, but it doesn't ruin this group. Instead, this group of people is protected in a way by Animal. They are its family now, and a family provides for each other.

These people taken in by Animal will hunt for food for Animal. Animal, in turn, will provide them with a safe sanctuary with shelter and warmth even in the worst times. As long as food is brought to Animal, Animal will remain docile and its followers unharmed.

Alas, Animal has an endless hunger, and no system could ever support it for long.

As Animal demands more and more food, the people feel its hunger too. They begin to eat more and hunt more. The wilderness will start to collapse due to the amount of consumption. They will go from killing the wildlife to hunting those outside of their family. Villages will be ransacked and travelers mauled due to this hunger. As people flee and food becomes nearly impossible to find, the family will starve.

For each one that dies of starvation, Animal will fall too and be reborn as them. When the whole cult starves only Animal will be left, and to onlookers who view the path of destruction, it will seem to them that it was Animal alone who murdered them all.

In less enlightened times on many planets, those who escaped to the woods with little skills to their names were those willing to risk death than be ostracized in their village. Back then Animal had much more control, and the safety given by Animal was more than enough for these people to accept the crimes they would need to commit. Now in a time where technology reigns supreme, Animal has little place in the universe.

Sightings have been going down dramatically for years as wilderness shrinks on many civilized planets and those who meet Animal rejecting its offer of safety. Civilization, even when it looks down on them, has much more to offer than a clearing in the woods, water, warmth, and shelter. The few incidents of Animal lurking in cities an towns have been crushed as soon as possible. As if it learned how to profit off of poverty there would be nothing stopping the Animal from leaving its home in the woods.

All Consuming Hunger: When someone under the influence of Animal starves they begin to feel an extreme dread, making them more violent and animalistic. Should they then go on to starve to death Animal will appear to die at the same time. The dead follower will then transform into a more monstrous version of themself. This follower is now Animal. This is why Animal is not easily described and why it has so many forms. Should the cult be removed and Animal "killed," it may have a chance of respawning from a nearby starving animal, most commonly any reptiles. Some cultures have found that the best way to contain Animal is to appoint one person worshiper of Animal, and kill the beast. As long as this one worshiper does not starve to death Animal cannot respawn as it prefers taking over its followers.

I'm lost in the woods.

I'm lost in the woods that I entered years ago, and hunger is overcoming me. I feel a dread within me. Death is quickly approaching.

I'm lost in the woods and hunger has taken over my mind. It started out slowly. It was kind to me, told me to seek my desires, but over time it grew more demanding.

I'm lost in the woods, and I can hear hunger shouting at me from the trees.

I'm lost in the woods with only a knife to my name.

I'm lost in the woods and see someone as lost as me.

I'm lost in the woods and cannot let Hunger consume me.

• Because Animal has no stomach anything it eats comes right out after being chewed apart. Smaller animals sometimes escape being killed by not getting chewed and falling right out of the location where the stomach would be.

• A once famous actor went on holidays into his cabin in the woods. When he didn't come back from his trip, someone was sent out to locate him, but that person as well did not come back. Eventually, a concerned fan of him went into the woods to figure out what happened. It turned out the actor had run out of food, was found by Animal and taken by the all-consuming hunger Animal imposes. This spawned a morbid, yet slightly humorous song about murdering the actor to free him from his cannibalistic murder spree.

• The hunger-lust that is given on Animal followers seems to be caused by Animal inducing an extremely high metabolism on them. Even when removed from Animal's location this affliction takes years to go away.

• Animal's demigod status is contested due to it showing up in multiple locations at one time. Due to this, some have argued that is a complex major anomaly, but others dispute that having more than one body does not automatically debunk the demigod hypothesis.