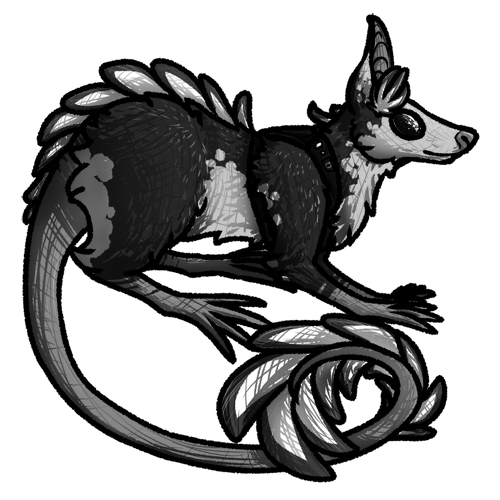 “Little friend... I don't know if you can do this for me, but please, if there's a way... can you let [name redacted] know?” — Recording salvaged from a shipwreck. It should be noted that the audio diary was in perfect condition upon recovery

Mysha is most often described as a young, well fed mallon, with fur glistening with a thin layer of frost. She is often wearing some sort of harness with monitoring equipment, though seemingly nonfunctional. Her fur, however, is rarely consistent between accounts, having wildly different patterns and colorations. The only constant is its texture. It is always said to be exceptionally soft and clean, and invokes many pleasant memories when touched, the most common being a beloved pet the person had in the past. Most accounts note how her expression invokes a feeling of sadness. Not a clinging sadness, but one of letting go.

You've been adrift for weeks. Your navigation malfunctioned and dumped you in the middle of nowhere, light years from your destination. Your food ran out five days ago, and the water is tainted with engine runoff and slowly killing you. You're the last one left, everyone else succumbing to either the hunger or disease, and you feel as if you're about to join them. You're about to close your eyes when you see it. It's a little fluffy animal on the other side of the room. You start to panic, thinking perhaps that The Hound has found you. But this is no hound. It's just a mallon pup. While you wonder how she managed to get aboard, she walks up to you and places her head in your lap. She's soft. You put your hand on her head and are reminded of the pet gwech you had as a child. You remember how you used to play together, how you would spend hours just running around and wrestling in the field behind your house, how you could just spend hours and hours with her and be the happiest child in the universe.

You start to cry, overwhelmed with the emotions of days long gone. And she's still there, looking at you with the same love and compassion that your gwech used to do. She looks a bit like her, even having that same discolored spots on her face. With what little energy you have you coax her closer. She gets up and lies in your lap, her head on your chest now, still staring at you with those beautiful eyes. They look like stars.

Your vision starts to dim. Your time is almost up. But you're not scared anymore. You're not alone anymore. This dog wasn't able to save you. Let's face it, you're beyond saving at this point. But she did all she could, and you're grateful for that.

You feel your breath start to slow, and your consciousness fade. You're calm. You could almost say you're happy. You just wonder what's going to happen to her when you're gone. You hope she'll be alright. She deserves as much. Seeming to sense this concern, she licks your hand, and you feel that she'll be all right.

And before long, you're gone. Your body slumps down, and the mallon gets up. She licks your face one last time, letting out a concerned squeak, before getting up to leave, off to find the next person in need of a friend.

Stories of Mysha are almost as old as space travel itself, mostly passed around between explorers or freighters. It is said that a young mallon, no bigger than a suitcase, will come to those that are in most need of someone to be with. The people Mysha seeks out are those who are well beyond rescue, such as someone stranded in space or a survivor of a pirate attack, and they are always alone. No hope of rescue, no means of contacting anyone, and nobody to spend their final hour with. It is only then that Mysha will appear. She doesn't do much. She'll mostly just curl herself up on people's lap, doing her best to keep them warm. For many, this is enough. They won't have to face oblivion by themselves anymore.

Due to the nature of Mysha, there is very little hard evidence of her existence. Most of what we have has been in the form of audio logs found by scavengers, with the occasional corrupted security footage showing a large blob nuzzling a crewman. Regardless of her authenticity, stories of Mysha bring comfort to many an explorer. The idea that, no matter what happens, someone will always be there with you is enough for many to keep going on.

Going Gentle into that Good Night: No one will face the end alone. She'll make sure of that.

• Due to the harness she is sometimes seen in, some believe that she may have been involved in early notail flight tests. They commonly used small animals to see the effects of space flight on living creatures, and many died before being able to make it back to the planet.

• A common nickname for Mysha is "the Pup," a deliberate comparison to the Hound. While the Hound seeks to drive people to their end through misery, the Pup guides people through it with compassion and kindness.