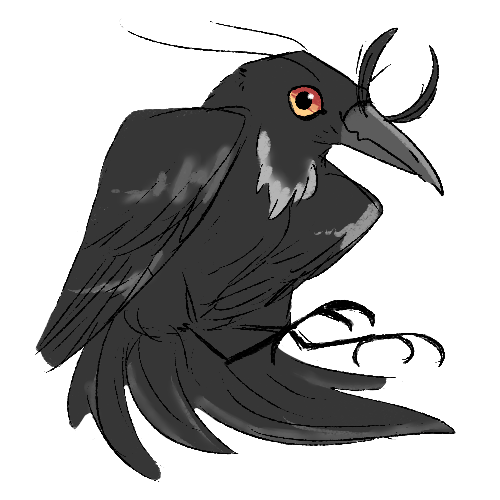 as the kaws soon descend /

With their hollow eyes and a silent beak /

I knew the world would end” — A. E. Poe, from "And Not A Tear Was Shed: A Collection of Poems and Short Stories"

Attack Method: Kaws will attempt to blind an attacker by swooping and pecking at its eyes before flying away.

Native to Eukaryote but now widespread across the galaxy, kaws are large corvids with mild psychic powers. Most wild kaws are completely covered in glossy black feathers, but spotting one with white patches on the throat, chest, or neck is not unheard of, and even the rare kaw with blue patterning can be found. As might be expected, such alternate colorations are more common within the pet trade.

A kaw looks very similar to a common crow, but there are a few noticeable differences. One is the pair of long, narrow feathers jutting out in a V-shape from the base of their beak, just above their eyes' it was once believed that these feathers were antennae, similar to those on a tailmic, that allowed kaws to use their psychic abilities, but further testing has revealed these to be standard, run-of-the-mill feathers.

The second most notable physical traits of a kaw are the two small clawed "fingers" on its wings. Although useless in flight, these claws aid the kaw with climbing and can be used to grab (or snag, as it were) and pull objects closer.

A kaw also has two notches in its upper beak, which allows it to grasp slippery items, such as fish, more effectively.

Offered primarily as a starter capture creature for K- and N-class notails, kaws are also occasionally chosen by E- and Q-classes for their inquisitive nature and uncanny ability to find people or animals in distress. This is accomplished through the use of minor telepathy; a kaw that is looking for food or entertainment will scan the area for any mental distress signals and then flock towards any signal they pick up.

As they are social creatures, a kaw that has found something interesting in this manner will broadcast the discovery to any nearby kaws, who will immediately join in flocking to the source. For capture creatures, this means notifying their owner and dragging them along to the site; if a notail with a kaw refuses to go investigate something their creature has found, or tries to leave the area before the kaw feels it is time to leave, the bird will harass their owner by mentally squawking and physically dive-bombing them until they comply with the kaw's wishes.

In the wild, the majority of incidents a flock of kaws will be drawn to are predators pursuing and killing prey, making this a useful behavior for successful scavenging. Kaws that are capture creatures have a higher chance of finding situations that are less deadly, such as a fight between notail children; while this may not be as useful for the kaw's survival, it does expose the bird's owner to stressful and dangerous situations they might not otherwise encounter, thus giving them some useful life experience.

When not actively looking for something to flock to, kaws are curious birds, poking their beaks and claws into nearly every nook and cranny they can find. Those looking to own one as a capture creature or pet are advised to keep a variety of toys in the bird's cage or play area, lest the kaw become bored and make its own, or worse, develop behavioral issues.

Even a perfectly healthy and happy kaw can be destructive, however, almost seeming to delight in mischief. Capture creatures and pet birds will easily learn the word "No" and what it applies to, and then proceed to toss their owner's mail off the counter or bathe in the dirty dishwater anyway. When not being little terrors, however, kaws can be affectionate, sidling up for head scratches and perching calmly on one shoulder while their owner goes about their day. They flock towards distress so on suffering they may caress.

Common Kaw: The common kaw is the type of kaw offered to notail children for use as a capture creature. They are trained more heavily to seek out disturbances and are bred to be more friendly to notails, but otherwise common kaws are identical to fancy ones.

Although children are given one kaw to start with, and it is possible to raise a solitary kaw, most children who choose this capture creature will exit the Woods with at least two. That is because the presence of another kaw will curb the original's tendency to wander off in search of intraspecies interaction

Mac Kaw: Mac kaws are the type of kaw bred for the pet market. Though their colors are always black, white, and blue, they come in a surprisingly diverse array of patterns. Notably, their impulse to harass their owners into checking out any noted disturbances has been eliminated. This seems to have been counterbalanced by an increased affinity for learning and saying random phrases, however.

Mac kaws can be quite lucrative for their owners, especially on social media. An entire subcategory of Notube videos is dedicated to their wacky antics.

Wild Kaw: Wild kaws are the type of kaw found in the wild, though "the wild" will often include cities, as kaws easily adapt to living in such areas. They are wily creatures and will often shy away from contact with sentient species, though particularly bold or needy individuals might approach people.

• Kaws are widely regarded as an omen of bad luck due to their propensity for flocking to unfortunate events. However, it is far more troubling to come upon such a scene without the presence of a watching flock. The best thing to do in such a scenario is to back away slowly until you are a safe distance away, and then run.

• Never injure or kill a kaw on purpose. You will become a target. Your remains will not be found. 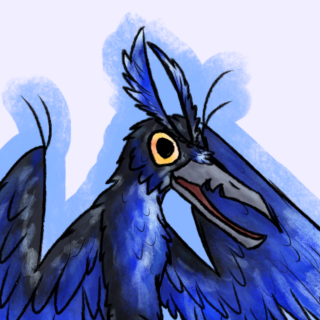