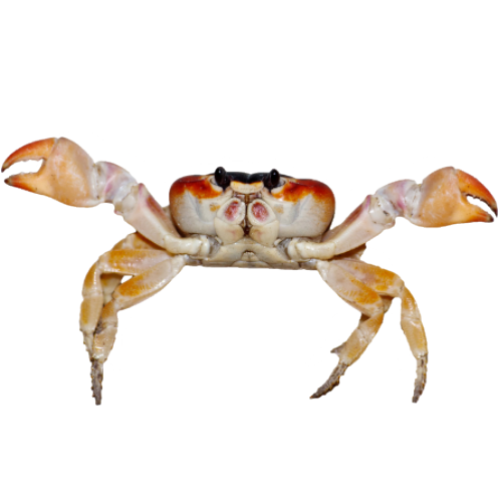 “There is only one step, and it is crab.” — Leading crab expert

Attack Method: Pinching whatever is currently causing it distress until it runs away.

Crabs are small, disk-shaped creatures sporting two eyestalks, eight legs, and two larger pincers in the front of its body. They have a hard exoskeleton which is typically colored in such a way as to blend in with its surroundings.

Crabs are a semi-terrestrial creatures, living in the water but capable of coming on land for feeding and other activities. Due to the way their legs have developed, crabs tend to primarily walk sideways, in a sort of scuttling motion. For food, they will typically subsist on algae and small mollusks, though this will naturally vary from planet to planet.

Crab Subspecies: Crabs come in many varieties, mostly varying by size and color, with some having more focus on being aquatic while others being more terrestrial. For the purposes of this article, the subspecies are not notable except for the fact that they are just as widespread as the main variety.

Everywhere: On the surface, crabs are completely mundane creatures. They have no special powers, no unique behaviors, and cause no notable effects on other creatures outside of their normal place on the food chain. Under ordinary circumstances, they wouldn't be notable enough to even warrant an entry in most planet's books. What is notable, however, in a way that both fascinates and enrages the xenobiological community, is that crabs are native to almost everywhere. In cases where a planets environment can even roughly allow them to survive, crabs will be present on that planet, with fossil records showing that they have been since well before the dawn of space travel.

What is most bizarre is that this doesn't seem to contradict any ecological webs. In some vast cosmic coincidence, crabs seem to fit perfectly into almost any planets natural chain of evolution. Some argue that it is not a simple case of convergent evolution either. Crabs taken from one planet and compared to another are often near identical. This seems to contradict a popular theory that crabs somehow descended from the stars. By all accounts, crabs just seem to happen.

• Crab theories are the leading cause of drunken disputes among xenobiologists.

• Due to their abundance across the galaxy, crabs are a popular food of choice for homesick travelers. Anywhere you go, you'll have the chance to eat something that reminds you of home. It's often said to be a good way to keep one grounded on their travels.

-Back to Fauna Menu-
< Coleomyr
Cratic >