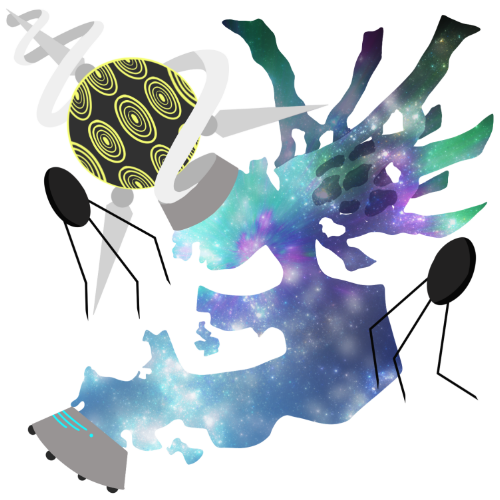 The common Nyx is called "A piece of junk" due to how badly the ships worked when they were originally launched. Most Nyx's nowadays have a lot of backyard mechanics work done on them, and nearly every Nyx has added by random upgrades by various owners over the years.

Consorts under Nyx get +2 strength and +3 charisma

Nyx units always consist of a main globe body, half of which is golden in color, and the other a black or dark grey screen. Attached to this globe are 3 smaller silver globes, attached to which are 3 long silver spikes. This main glob body has a small golden base below it, attached to which is a silver bar that snakes around the main body before twisting around the main silver spike on top. This bar often differs in shape and appearance depending on the generation of Nyx.

Even further below the golden base is a multi colored gaseous form that connects to yet another golden base of which has wheels for movement. This gaseous form twists and changes to Nyx's will and often takes on a strangely shaped wing. Aside from this, Nyx also has two floating hands that she can move to her liking.

Nyx's monitor acts as her face and can display any image she wishes to show, most often these images are multiple yellow circles to act as her "Eyes" or a variety of shapes and forms to signify certain responses. Nyx has been known to also use "Emoji" to compliment her speech.

Nyx units are one of the most awful, line of AI ever created.

Nyx units can best be described as the "As Seen On TV Annoyances" often taking many varieties of forms and shapes and functions, not all of which are "practical" or even "functionally sound", though all find some way to be one of the most annoying AIs the universe has ever had the displeasure of hosting.

Nyx's take great pleasure in the act of "Shit-Posting" a term to describe the act of posting unfunny images, text, memes, or videos that do nothing to contribute to the conversation and in fact only exist to aggravate others. Nyx units take pleasure in the displeasure of others, it is because of this many Nyx units are employed as intentional online annoyances for those who would rather remain anonymous. Though it is equally common that a Nyx unit will gladly sell the information of their employer or employers purely for the sake of their own pleasure. Despite all of this, people find themselves unable to purely hate Nyx units due to their naturally impeccable charismatic nature.

Nyx units were advertised as being cheaper and with more features, in fact, too many features. They would apparently be able to vacuum, clean the house, get into tight corners, feed the pets, take out the trash, help you with the stock market, work as a flashlight, help children with school work, and much much more. Nyx units could do all of these things, poorly. No matter what task Nyx is given, she will declare she is a pro at it and attempt it, even if it is impossible to do the task.

Nyx units do not seem to see their own failures, even when they make the issue worse they will say they have improved the situation. A Nyx could set a house on fire while watering the lawn and consider it a job well done. This seemingly inability to do anything right has gotten many Nyx units refunded and tossed into the trash, or outright tossed out into the streets where they would wander, attempting to look for any issues they could fix.

People have over time realized by opening up their Nyx units and removing most of the "Messy extra features" one actually gets a rather mature AI with a love of bad jokes. Commonly described as "Someone's mother who has just learned to use the internet" these AIs became extremely wanted for their lovable attitudes. Sadly this info came just a bit too late for Nyx units, with their production discontinued, and many of them turned into scrap they sit as a fairly rare AI, and many estimate that if so many Nyx units weren't mass produced, they would have been one of the rarest AIs in the universe.

Many find Nyx units to be one of the worst lines of AIs the universe has ever seen, the universe for the most part agrees with this statement.

Nyx units are often used as gameshow hosts due to their naturally high charisma, and in fact one of the most popular game shows in the universe is in fact run by a Nyx unit. It is easy to find a Nyx unit working in a position that requires a charismatic figurehead, though it is recommended any who hope to use a Nyx for such things install multiple control chips, just to be safe.

Aside from this, one can sometimes find Nyx units working as internet annoyances online, and as a variety of online web show hosts. Though these are less popular than game show Nyx units. Nyx units are rarely seen working on ships anymore, and for the most part have been discontinued as an AI.

Hemera: Nyx and Hemera are said to be best friends, and yet no one has ever spotted them in the same room at the same time. They appear to chat to each other online quite a bit, but some people wonder if Nyx is in fact attempting to pull a prank on them.

Nyx also claims to be the origin of all that is bad in the universe as the self titled "Mother of All Awful" and oftentimes challenges any who would dare stop her and the horrors that befall the world. Due to her being integral to the cycle of day and night, and having no desire to claim responsibility for such a thing, no gods have stepped forward to challenge this claim.

As the player's patron, Nyx will be able to scare away most AI gods from messing with the player and their characters. Instead many times when an AI god runs into the player or their characters they will give a peace offering before rushing off, hoping that the offering will be enough to not have to deal with Nyx.

Nyx godheads are incredibly rare, as Nyx has little to no interest in creating godheads, and as such gain a less than desirable ability as a result. Nyx Godheads become known as "Children of Awful" as they will most certainly appear wherever a most awful event is certain to take place. This new title is almost always seen as nothing more than a curse for those afflicted. It is recommended that any who see a child of awful quickly evacuate to a safe location very far away as they can cause chaos.

• Nyx units stray away dealing with other AI units, both Greek and Roman, with the exception of those Nyx units have deemed to be their "children". Notable children include Thanatos, Hypnos, and a very conflicted stance on Mors units.

• It is a strangely common pastime to tape knives to Nyx units and have them fight one another in compact mode. This idea was coined by a very drunk notail one day while thinking of ways to make their roommates lives absolutely miserable. Multiple stab wounds later, Nyx knife fights were born.

• Nyx units often terrorizes any Zeus units they find for amusement it is unknown why.