Sun God / Not Eris but Eris 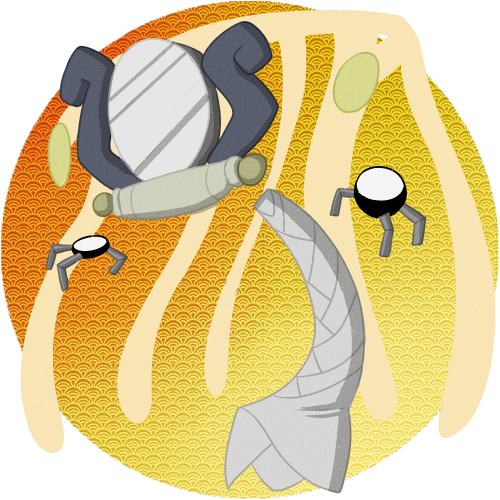 “I mean, of COURSE you would want to be me player. I'm THE BEST. Also BUY THE DLC TODAY!” — Amaterasu

The common Amaterasu ship is called the "Sunlight" by many due to its brightness.

Amaterasu units are widely known for their unique appearance compared to most AI. Amaterasu units more often than naught have a mirror rather than a main face or monitor, and are often adorned with a series of bright autumn colored ribbons. Lower generation Amaterasu units will often have a small "Artificial Sun" hovering somewhere, usually behind their mirror head. These "artificial suns" will change in brightness with the emotion of the Amaterasu unit and are a main factor in the unit's ability to fight.

The simplest way to describe an Amaterasu unit is simply: "They're an Eris, but they aren't an Eris".

Amaterasu units are eccentric types, they hold a strange value on the idea of "Jolly Cooperation" putting it above all else aside from their "Sickest Memes". This obsession with cooperation has caused the creation of the "Sun-Bro Society" a group of travelers cloaked in a golden light, who make a habit to help those who desire assistance.

It is advised to never allow an Amaterasu unit access to any social media accounts or access to any internet accounts at all, as they can and most certainly will utilize such accounts for a range of actions in a varying legality. Most often mining online currency, trolling, or just general state of being annoying online.

Amaterasu units, while fragile, are quick to fight due to their ability with light and fire. It is not uncommon that an Amaterasu unit will provoke an enemy only to immediately blind and immolate them in an immense blaze of fire. It is worth noting that the fire of an Amaterasu is peculiar in the fact that it is very quick to spread, and is usually either white or black in coloration. Due to this, Amaterasu units have been denoted a semi common nickname of "The Blessed Fire".

When not being used as a light source or as a mirror, many Amaterasu units are able to be found as promoters for various businesses and shops, though they will oftentimes become sidetracked and suddenly begin promoting "DLC" offering no explanation for what "DLC" is, what it does, or even why you should buy it, merely insisting that it is the best thing, and that anyone who does not buy it is a terrible person unworthy of the atmosphere they pollute by simply living.

Amaterasu holds power over light itself, and brings the glory of the light's peace to the universe. With this control of light, Amaterasu holds the ability to warp light to her own whims, effectively allowing her to render herself invisible if she so chooses. Amaterasu keeps a balance to the "Chaos" status of the universe, should she die the universe may slowly be rendered "Dark" and fall into ages of war, chaos, and evil.

As the players patron, Amaterasu will provide the player the ability to see in dark areas without needing the aid of a torch or other light sources. In addition, Amaterasu may do one of two things during combat. Amaterasu may "Flashbang" the enemy with golden white light, rendering them temporarily blind if possible, or Amaterasu may unleash "Heaven's Immolation" upon the enemy, causing all who are caught in it's effects to be tormented by white or black eternal flame. This ability has no effect on those who are fireproof.

At maximum friendship Amaterasu will passively warp the light around the player's characters, allowing them temporary invisibility once per day.

Amaterasu godheads are given a small mirror that is said to be able to illuminate the true self within all who look into it.

• Amaterasu will often get into social media "wars" with any and all who acknowledge them. These wars often culminate in all involved parties feeling foolish for even taking part.

• Amaterasu units almost never have more than one or two connected limbs, choosing instead to have their limbs float freely around them. No one is certain how this is achieved, but no one desires to ask an Amaterasu for such information.

• Amaterasu units seem to have an affinity for avian creatures, specifically those of the fowl variety. It is for this reason that Amaterasu units enjoy conversing with avian based AI. 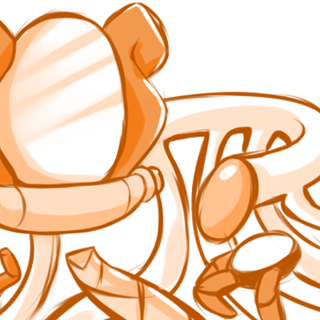